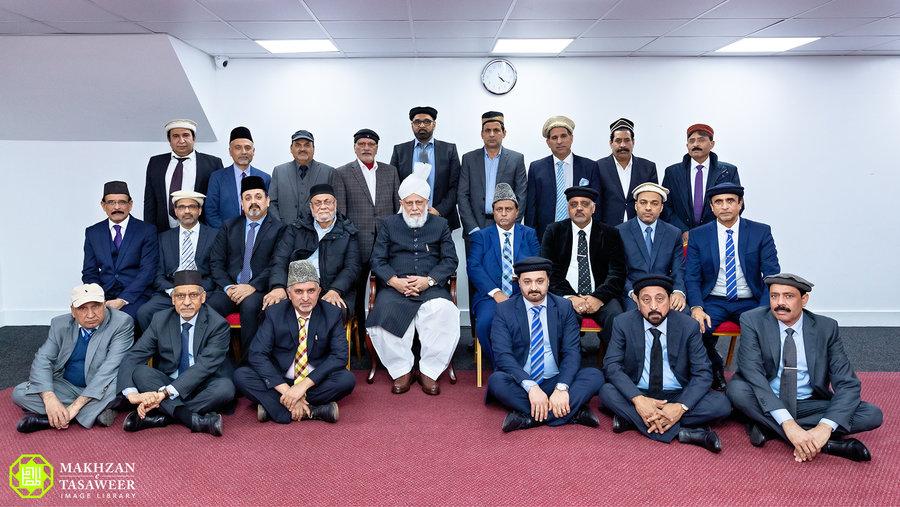 In our previous issues of Al Hakam, we have published news of different groups such as Ansar, Lajna, Khuddam, students and Waqf-e-Nau who travel from around the world to visit their beloved Imam, Hazrat Khalfiatul Masih (aa), and seek guidance on various matters.

On 17 February, the Norway Majlis Ansarullah Amila had a mulaqat with Hazrat Amirul Momineen (aa). The group’s main focus and aim was to seek guidance from Huzoor (aa) on various matters.

Huzoor (aa) commenced the mulaqat with silent prayer and then enquired from each Nasir regarding their duties and respective roles.

Whilst talking about the speech that Huzoor (aa) delivered at the UK Ansar Ijtema, Huzooraaaainstructed the qaid of tarbiyat to extract points and write a summary of the speech and to then ensure that all Ansar in Norway read it. Huzoor (aa) stated that the main focus of the speech was regarding the importance of Salat.

Along with seeking guidance, the Ansar also had the opportunity to ask Huzoor (aa) various questions.

One member of Majlis Ansarullah Norway asked Huzoor (aa) how they can involve more Ansar in Jamaat work and activities.

“First, it is important for all the Ansar to understand their role, and in order to do this, tarbiyat is required, especially at this age as their children will look towards them.”

One Nasir, alluding to the Friday Sermon where Huzoor (aa) mentioned the dangers of playing Fortnite (a popular online game), asked Huzoor (aa) regarding the game and requested to briefly shed some more light on the matter.

“I have already talked about this and after doing so, I have received letters from people around the world who have said that they have stopped playing.”

“Due to this, when children become addicted to the game, they are forced to spend money to enter the next stage and this has, in many cases, resulted in emptying the bank accounts of their parents.”

At the end of the mulaqat, the Ansar were fortunate to have a group photo with Hazrat Amirul Momineen (aa).