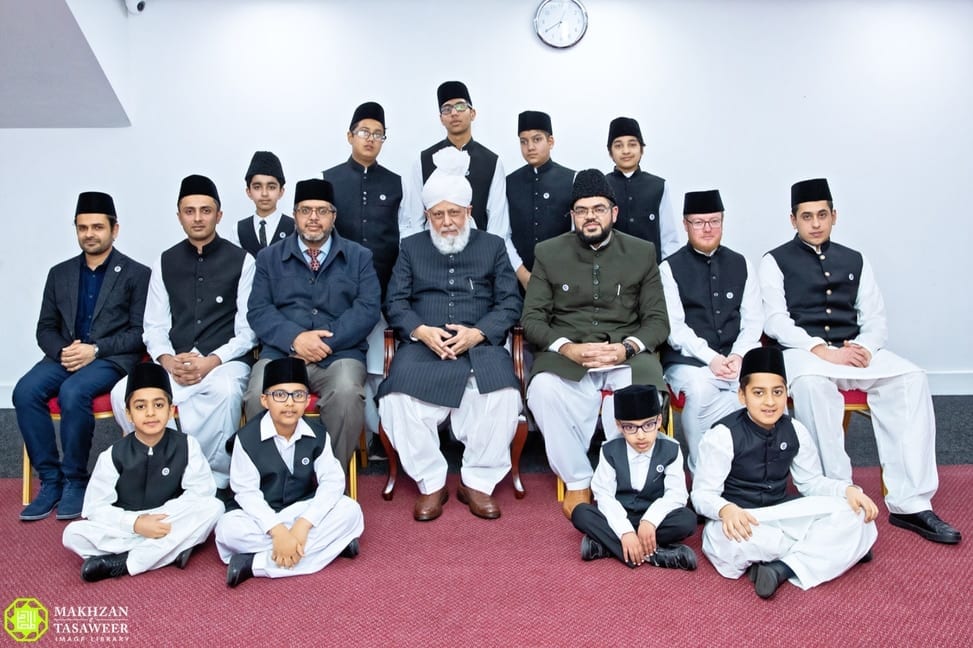 On 23 February, a group of 13 Waqifeen-e-Nau of Ireland, along with parents, had the opportunity to sit in the blessed presence of Hazrat Khalifatul Masih(aa).

During the mulaqat, Huzoor(aa) answered questions and queries presented by the Waqifeen Khuddam and Atfal, whilst also graciously giving them pens and an opportunity for a group photo.

Rabeeb Ahmad Mirza Sahib, a missionary based in Ireland, talking about the purpose of the mulaqat, said:

“The purpose of the mulaqat was not only to meet Hazrat Khalifatul Masih(aa), but also to seek guidance from Huzoor(aa) with regard to challenges the Waqifeen face in their day-to-day routines and ultimately for them to enhance their bond with Khilafat-e-Ahmadiyya.”

“Huzoor(aa) seemed very relaxed during the mulaqat and, as usual, his answers were a means of great clarity. The guidance from the Khalifa of the time is something that we are very fortunate and blessed to have”.

Discussing the effect the mulaqat had on those who attended, he said:

“The mulaqat had a profound effect on the group in terms of uplifting the spirituality of each Waqf-e-Nau. Even the parents shared the same sentiments. It was a special moment which will be cherished by the group.”

During the mulaqat, a Tifl asked Huzoor(aa) about any memories he had with Hazrat Khalifatul Masih II(ra). Huzoor(aa) recollected by saying:

“When Hazrat Musleh-e-Maud(ra) passed away, I was fifteen years old. Before this, Huzoor(ra) remained ill for a long period and we used to visit him and talk to him a little. I also remember being present at his speeches at Jalsa.”

Huzoor(aa) further advised the Tifl to read the Al Hakam’s Musleh-e-Maud edition, published on 15 February 2019, in which Huzoor had mentioned his recollections with Hazrat Musleh-e-Maud(ra). (This edition can be found on www.alhakam.org/al-hakam-15-february-2019)

A Khadim enquired about Huzoor’s opinion on Brexit to which Huzoor(aa) said that he had presented his opinion at the European Parliament, which was that he opposed brexit, whilst also voting against it.

A Waqf-e-Nau who has specialised in surgery was interested to learn about Huzoor’s(aa) experiences in Africa. Huzoor(aa) lovingly responded by first asking the Khadim if he was ready to serve in Africa himself, to which the Khadim replied affirmatively. Then, describing his experience, Huzoor(aa) said:

“There is Masha-Allah a strong Jamaat in Africa. People in Africa are very good. You should be good with people whilst there – show humility and practice high morals and as a result people will respect you. However, if you show arrogance or think of yourself as above others, then people will dislike you. My experience was very good; I showed respect to others and they showed respect back.”

One youngster enquired about fast food, whether it was Halal or not. Huzoor(aa) explained:

Huzoor(aa) was asked about what he ate for breakfast by a Tifl. Huzoor(aa) responded by saying that he eats a healthy breakfast which lasts him the day. Huzoor(aa) highlighted the fact that those who have a heavy workload should eat a decent breakfast.

A young Tifl asked whether he was allowed to go to his friend’s house to stay or visit, to which Huzoor(aa) responded by saying:

“You can go to their house but there shouldn’t be overnight stays at other people’s houses. You can go to play, of course.”

One Waqif-e-Nau asked Huzoor(aa) if going to the cinema once in a while was permitted. Huzoor(aa) said that if it was to watch a documentary, then it is allowed, otherwise cinemas should be avoided and instead, if children want to view something, it should be at home with parents.

A Khadim wanted to know Huzoor’s opinion about climate change, to which Huzoor(aa) responded by saying:

“There is a serious issue on climate change, it is quite obvious. Ice is melting in the North Pole, the level of water is increasing and it is said that by 2030, countries like the UK will be underwater – the same will be with Ireland. The duration of warm weather is increasing as well. I remember some 30 years ago, when we would come to the UK, you could not go outside in June without a jacket.”

A young Tifl asked about why Allah created humans. Huzoor(aa) replied by saying:

“Allah wanted to know who is good and bad. That is why Allah said, ‘If you do good works, then I will reward you. Whilst if you follow Satan, I will punish you.’ So, Allah created you to give you rewards after you protect yourself from Satan and do good works.”

A Khadim enquired as to why men were forbidden from wearing gold and silk whereas women were permitted. Huzoor(aa) explained:

“They have different duties and there should be some distinction between men and women; this is why there is a dress code within Islam.”

One child asked about the responsibilities of a khalifa and a prophet, to which Huzoor(aa) replied:

“There are two things for which prophets come: One, to bring people closer to their Creator, and second, to make them realise their duties towards each other – this is the duty of the prophet. The khalifa is to continue the job of the prophet after his demise.”

A Tifl asked why Zuhr and Asr prayers were offered in silence in congregation as opposed to recitation aloud as is done in other prayers. Huzoor(aa) explained:

“Firstly, we follow the practice of the Holy Prophet(sa). Secondly, there is a unique sense of peace by reading these prayers in silence. You enjoy offering Zuhr and Asr prayers whilst there is silence, don’t you? It is because the atmosphere of that time of day means it is better to offer Salat in silence. Conversely, at Fajr and Isha, the atmosphere during that time of day requires tilawat to be offered aloud.”

Another Tifl wanted to know about the story of Adam and Eve being cast out of heaven. He enquired about which heaven they were cast out of. Huzoor, talking about this heaven, said:

“Heaven is this world. If you follow Allah’s commandments, then you are in heaven. If you do not, then you are in hell. They [Adam and Eve] were not sent anywhere. Allah said, ‘This is the right path. If you follow this path, you will go to paradise.’ And that paradise is here in this very world. This is why the Quran says that there are two paradises – one in this world and one in the hereafter.”

The mulaqat concluded with having the opportunity to meet Huzoor(aa) individually and then having a group photograph.