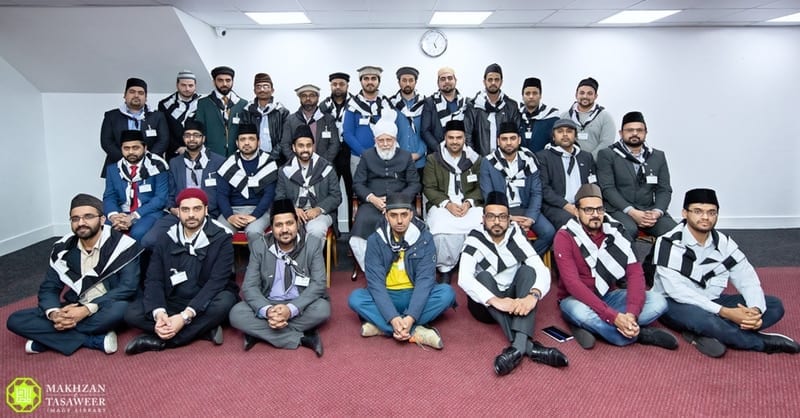 On 24February 2019, qaids from Majlis Khuddam-ul-Ahmadiyya United Kingdom had the opportunity to seek guidance from Huzoor(aa) in a group mulaqat. A total of 127 local qaids and 22 regional qaids were present.

The mulaqat started with silent prayer led by Hazrat Amirul Momineen(aa) after which Huzoor(aa) asked each qaid about the location of their respective majlis and the number of Khuddam and Atfal there. After ensuring all qaids had introduced themselves, Huzoor(aa) enquired whether or not all qaids held monthly meetings, while later emphasising the importance of holding meetings at least every month.

One qaid asked Huzoor(aa) whether he could donate to charities other than Humanity First. Huzoor(aa) replied by saying:

A qaid from North West Region asked how attendance for Salat could be increased at mosques.  Huzoor(aa) responded first by quoting the Holy Quran, saying:

“You have to be persuasive; be consistent in calling them. Qaids and their amila members should themselves be active and regular in offering their congregational prayer, then Khuddam will follow.”

Regarding Khidmat-e-Khalq events (serving humanity) Huzoor(aa) advised  that Khuddam should be made aware of the reality behind Khidmat-e-Khalq, only then will they understand its true purpose and begin to come to events. Huzoor(aa) said

“Again, this comes down to the tarbiyat department”.

Another qaid raised the issue of a small number of inactive or demotivated Khuddam, to which Huzoor(aa) advised by saying:

“If you, as a qaid, and your amila are active, then there is no question of other Khuddam being demotivated.”

Regarding those Khuddam who were inactive, Huzoor(aa) said that qaids should frequently visit them just to see how they are doing, in a friendly manner. Addressing the issue of demotivation within Khuddam, Huzoor(aa) instructed the qaids

“You should never give up.”

The topic of marriage amongst Khuddam was also raised. Huzoor(aa) commented by saying:

“I think every young boy needs to be married. If they have a good job and they are of the right age of marriage, then you should ask them to get married. This is the Sunnah. The Holy Prophet(sa) said, ‘Whoever follows my Sunnah is from among me and whoever doesn’t, he is not.’”

“You should not pressurise them. Make good friendships with them and when you are talking with them, you should talk as a friend. There is no need to put pressure on them – just make them realise their obligations. Once they realise it, they will come.”

Towards the end of the mulaqat, Huzoor guided the Qaideen in the following words:

“You should give equal emphasis towards chanda, tarbiyat and to tabligh. If your tarbiyat is good, then everything is done.”