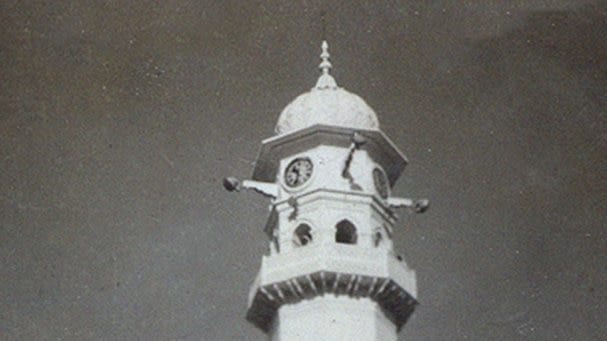 Foretelling the advent of the Promised Reformer of the latter days, the Prophet of Islam, Hazrat Muhammad(sa) prophesied:

“He (the Promised Reformer) will descend near the white minaret, East of Damascus.” (Sahih Muslim, Kitab al-Fitan wa Ashrat as-Sa‘ah)

Specialists of Hadith identify that this Hadith related to the second coming of Jesus Christ(as) falls in the category of mukashifat (divine visions). Scholars of religious knowledge, being aware of the allegorical and metaphorical nature of these divine visions, recognise the fact that they are manifested in a rather unique and surprising manner. Therefore, the Promised Messiah(as), an embodiment of Jesus(as) son of Mary(as),envisioned in the year 1894:

“The Promised Messiah, or one of his successors shall journey to Damascus.” (Hamamatul Bushra, Ruhani Khazain, Vol. 7, p. 225)

Accordingly, Hazrat Mirza Bashiruddin Mahmud Ahmad, Khalifatul Masih II(ra) visited Damascus during his tour of Europe in 1924 and happened to take up accommodation towards the east of the white minaret.

Yet again, for the second time while traveling to Europe, this time by air, he descended in Damascus. Hence, the prophecy of the Hadith was fulfilled.

On one occasion, the Promised Messiah(as) drew a sketch of the minaret on a piece of paper with his own blessed hand, proclaiming that Allah the Almighty had commanded him to build this type of minaret. 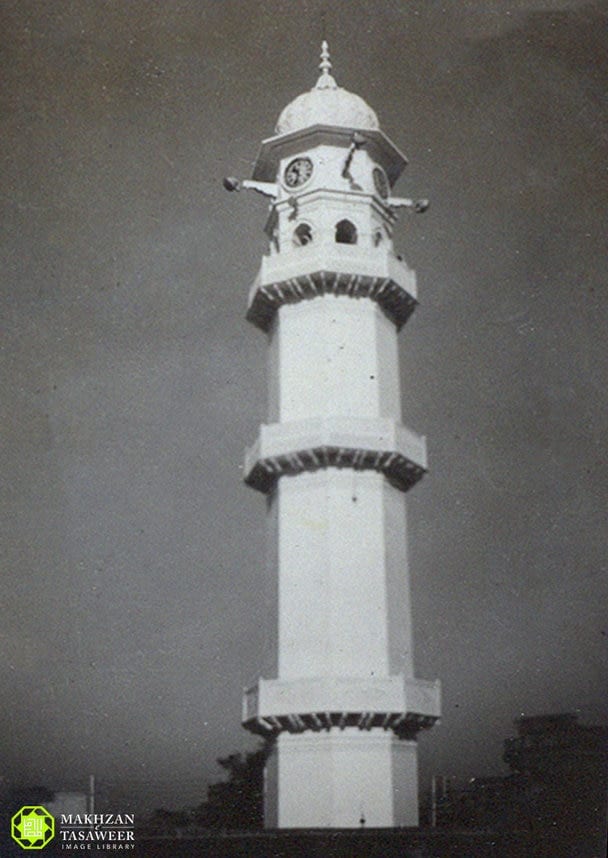 There lies a particular passion and desire in the ummah of Muhammad(sa) to witness the practical fulfillment of the prophecies of the Holy Prophet(sa).

A study of Islamic history reveals that Muslims, spending thousands of dinar, built a minaret in the city of Damascus, Syria but it underwent various calamities. At present, a minaret stands within the Umayyad Mosque while another minaret exists on the eastern gate of the ancient city of Damascus. 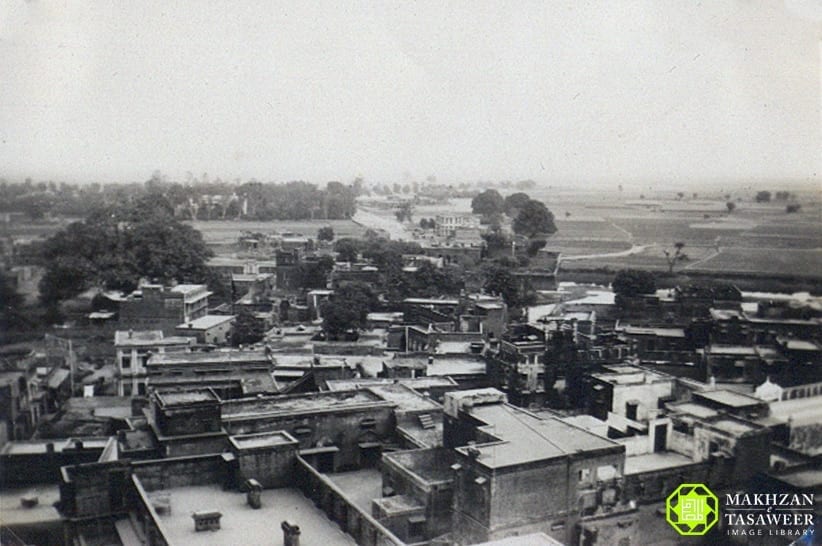 Recounting an interesting experience regarding Minarat-ul-Masih (the Minaret of the Messiah), Hazrat Musleh-e-Maud(ra )says:

“During my stay in Damascus in 1924, I asked the opinion of Maulvi Abdul Qadir Sahib al-Maghrabi, a well-known religious scholar in that locality, as to where that minaret was upon which Prophet Jesus(as )would descend. He replied that it was the minaret of the Umayyad Mosque, while another Maulvi Sahib said that the minaret present in the neighborhood of Christians would be that minaret, and yet one Maulvi Sahib said that Jesus(as )would himself build that minaret.”

Breaking through the myths of history, we uncover that another concept was also present in the ummah of the Holy Prophet Muhammad(sa), according to which the white minaret being physically present in the city of Damascus was not mandatory, and instead, the only requirement for its existence was towards the eastern side of Damascus. (Imam Jalaluddin al-Suyuti, Sharah Ibn-e-Majah)

Revisiting Jamaat-e-Ahmadiyya’s history of the year 1900, we find a few devoted companions belonging to remote areas and in underprivileged circumstances contributing to various treasuries responsible for the propagation and promulgation of Islam, irrespective of their poor financial condition. In those circumstances, it seemed beyond the bounds of possibility to raise money for building the minaret. Spite all the difficult conditions, the Promised Messiah(as )received divine inspiration and published a detailed announcement for the devoted members of the Jamaat on 28 May 1900:

“In accordance with a Hadith of the Holy Prophet(sa), the construction of a tall minaret has been suggested which shall also serve as a place to call for prayers. A bright light with a large clock will be fixed on it. Moreover, the minaret will serve as a symbolic representation of the prophecy regarding the Messiah of Muhammad(sa) لیظھرہ علی الدین کلہ [“He will make (Islam) prevail over every other religion”], signaling that the truth of Islam would reach the same heights as would the glory of the minaret. Similar to the elevated voice which overwhelms all and sundry, the religion of Islam will be victorious over all other religions. The light and the clock of the minaret will highlight that along with the expansion of worldly discoveries, the days of divine light have descended and the world should realise the demands of the age.”

After the publication of this announcement, Muslim clerics and opponents of the Jamaat criticised that spending money on the construction of a minaret and fixing a huge clock upon it would be an act of squandering.

Consequently, the Promised Messiah(as )published another announcement on 1 July 1900, stating:

“I am amazed at the sight of these insulting individuals who are still hailed as Muslims. Beware that the purpose of building this minaret is to fulfill the prophecy of the Holy Prophet(sa) … and it is indeed a virtue to fix a large clock on the minaret as a source of assistance and reminder of time for the worshipers. As a matter of fact, these Maulvis are not desirous of fulfilling the prophecy of the Holy Prophet(sa) … It was the will of God Almighty that a minaret be erected in Qadian because without a doubt, it is the place where the Promised Messiahwould have descended … Any individual who contributes to this cause will be our close companion in the eyes of God … Hence, it is destined that the real advent of the Messiah, which would inspire the hearts, carrying light and certainty, shall manifest after the completion of the minaret.”

One can sense the financial condition of the Jamaat from an incident when Hazrat Mir Hisamuddin Sialkoti(ra), sitting in Masjid Mubarak, estimated the total cost of the minaret to be ten thousand rupees. The Promised Messiah(as) told him repeatedly to devise a plan to lower the expenses. Eventually, the Promised Messiah(as) divided the amount of ten thousand rupees on a hundred parts and published a list of 101 devoted servants, appealing that those who contributed to the cause would have their names engraved on the minaret. Several companions, who were seemingly not able to offer much, responded to the cause selling their household goods. The Promised Messiah’s noble wife, Hazrat Nusrat Jehan Begum(ra) promised to contribute one thousand rupees and to sell her house in Delhi to donate more.

Primary arrangements, designs and the selection for the place of construction was finalised towards the end of 1901, but owing to the outbreak of plague, there began a shortage of artisans and labourers in the country.

On Friday, 13 March 1903, on the day of laying of the foundation of the minaret, the Promised Messiah(as) held a brick in his hand and prayed for a significantly long period. Huzoor(as) then instructed to place the brick on the western side of the foundation. Hazrat Mir Nasir Nawab(ra) was the supervisor of the construction work. 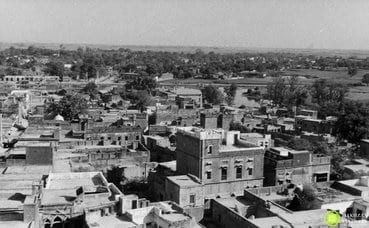 The base of the minaret was erected after pouring concrete deep into its foundation. The local Hindu populace, out of mischief, complained to the authorities that the minaret would expose their houses to the views of strangers. The tehsildar (executive magistrate of the administrative division) and district magistrate reached Qadian for inspection and interviewed the locals. On the basis of received testimonies, the deputy commissioner of Gurdaspur dismissed the case.

Despite all the efforts, appeals and monetary sacrifices, the construction came to a halt due to a shortage of expenses. Someone asked the Promised Messiah(as),

“When will the minaret be completed?”

“If we end up finishing all the work ourselves, then what source will there be of attaining reward for those who are to come after us.”

The construction work of the minaret could not be resumed throughout the era of Hazrat Khalifatul Masih I(ra). However, Hazrat Musleh-e-Maud(ra) resumed the construction of the minaret by placing a brick on the incomplete structure on 27 November 1914. Qazi Abdur Rahim Sahib was appointed as the supervisor. Marble of the finest quality was transported from Ajmer Sharif.

Reaching the height of 105 feet, the construction of Minarat-ul-Masih completed on December 1915. The total number of stairs of the minaret are 92 and there is a total of 211 names of companions which are engraved on it.

This minaret has experienced more than a century of opposition and hostility to date, but its light continues to shine across the globe.

This elevated minaret is announcing with all its glory and magnificence:

“Tread joyfully that your time has arrived, and the feet of the Muslims have been planted firmly on a high tower.” (Tadhkirah [English rendering], p.368)