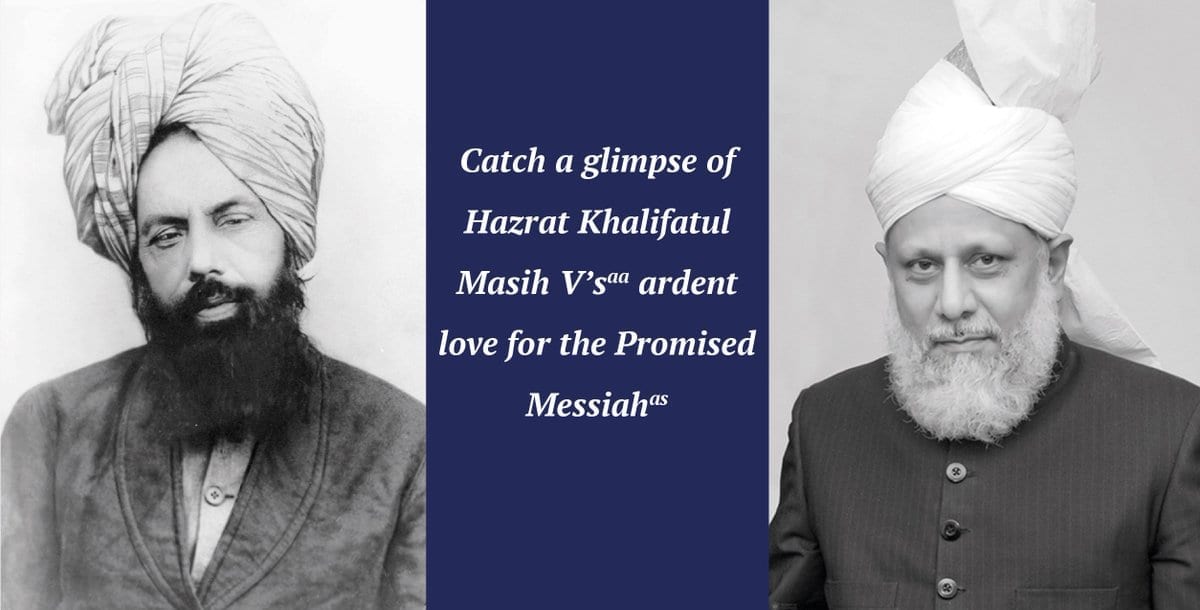 A few days ago, Hazrat Khalifatul Masih(aa) graciously granted me permission to meet him for an official audience. On the subject of the rank and status of the Promised Messiah, Hazrat Mirza Ghulam Ahmad(as), I said:

“Huzoor, you once instructed all departments and Jamaats that we should not be reluctant in talking about the Promised Messiah(as) as a prophet of God…”

“Yes, the Promised Messiah(as) was a prophet. Allah declared him so, the Holy Prophet(sa) declared him so, thus we should openly and proudly express this point. Alongside this, it should be clarified that the Promised Messiah(as) himself explained that his prophethood was not mustaqil – he did not bring any new Shariah – rather it was zilli and buruzi [as a reflection and subordinate] prophethood, which he attained through complete obedience and absolute devotion to Prophet Muhammad(sa).”

After a slight pause, Huzoor(aa) carried on:

“The Promised Messiah(as) was informed through divine revelation, ‘A warner came into the world, but the world accepted him not.’ Thereafter, God promised him that his truthfulness would be proved to the world by means of mighty onslaughts. So if the world is not made aware of his status, then how can it turn towards God?”

“Huzoor, the modern-day man doesn’t want to have anything to do with religion…”

“This is what needs to be explained to such people, that Allah sent a warner in this era just as He did in previous eras. If they accept him, then they will be saved; if not, then they will be heading towards catastrophe. The world now stands at the brink of disaster, so now, it becomes all the more imperative to convey this message. The fact is that there is no other choice other than to accept the Promised Messiah(as) – this is the only means of salvation.”

With these words, my brain was diverted to many other instructions that Hazrat Khalifatul Masih(aa) had given in the past.

One such instruction was with regard to MTA programmes, when Huzoor(aa) said that we should always bear in mind that the primary purpose of MTA shows should be the propagation of Islamic teachings. Huzoor(aa) also explained that the Promised Messiah’s(as) teachings were in fact the true teachings of Islam, thus no matter what the nature of the programme was, the main goal should be to highlight Islamic teachings.

“Where will you store it?”

When Huzoor(aa) is informed about the storage location, he then guides us to document details of where it came from so that it may be recorded in history.

When handwritten notes and letters of the Promised Messiah(as) are to be preserved, and the request for their conservation is submitted to Huzoor(aa), he carefully listens to the request and gives further guidance. When discussing costs, Huzoor(aa) openly grants budgets for this purpose and creates all forms of ease.

I telephoned the private secretary and asked that my request be presented to Hazrat Amirul Momineen(aa) to meet him the very same day. Huzoor(aa)graciously approved for me to meet him during the slot for evening mulaqats.

I entered Huzoor’s(aa) office and showed him copies of the pages. I also informed Huzoor(aa) that my request to show the copy during the live show, Rah-e-Huda, on MTA was being processed. To show them once cost a certain amount, but I said that I was in discussions with them to see whether they would make an exception as we were a charity organisation. Huzoor replied:

“This isn’t a substantially large amount of money. For such a precious document of the Promised Messiah(as), how far will you get in haggling? Give them the required amount, show it [on MTA] and preserve it.”

“Have you compiled all the newspaper cuttings related to the [John Alexander] Dowie prophecy coming true.”

“Some have been compiled, but more will be added.”

The next few days were spent in searching for the cuttings. It should be mentioned that when Huzoor(aa) said this during the mulaqat, at the time, there was no context of Dowie. But the more newspapers became available, the more I realised that there was great wisdom in that moment. What we usually considered to be the fulfilment of this prophecy was outshined by something far greater.

From the Far East to the far west, i.e. the western parts of USA, newspapers covered the fulfilment of this prophecy. From the time when Hazrat Mirza Ghulam Ahmad(as) foretold Dowie’s end until Dowie’s death, many newspapers of the world took a keen interest in the updates of this prophecy, but when it was actually fulfilled, the attention increased manifold.

By means of this prophecy, the Promised Messiah(as) and his Jamaat were given coverage throughout the world, and God’s promise, that

was practically fulfilled. In later years, these words would be fulfilled in new ways and they continue to be fulfilled today.

Once, Hazrat Khalifatul Masih(aa) mentioned a couplet from the Promised Messiah’s(as) qaseeda [Arabic poem] and enquired about something regarding it. It was a moment that reflected my ignorance and so I replied that I did not know.

Huzoor(aa) then picked out Qasaid-ul-Ahmadiyya – a book containing all the qaseedas of the Promised Messiah(as) – from the shelf to his left, flicked through the pages and flicked through them in a way that only after a turning a few pages did he find what he was searching for. Huzoor(aa) read out the couplet and explained the deeper meaning to this humble servant.

Similarly, the Ruhani Khazain set to his left, with Post-It Notes scattered in each book, shows the extent to which it has been studied.

I once informed Huzoor(aa) that somebody had called in to Rah-e-Huda and said that Jalsa Salana was an innovation in Islam. Huzoor asked,

“What answer did you give?”

I replied with the answer that we gave. Huzoor(aa) said,

“The Promised Messiah(as) gave the answer to every such question. There is no such allegation that he did not answer.”

Among the handwritten notes of the Promised Messiahas stored at the Ahmadiyya Archive and Research Centre, the revelation [Arabic] “Surely, I am with you, O Masroor” was found written in Hazrat Ahmad’sas handwriting

Hazrat Amirul Momineen(aa), on one occasion, said to me,

“I have devised my own method of searching for extracts and references of the Promised Messiah’s(as) writings.”

These were but a few examples of how I have seen Hazrat Khalifatul Masih(aa) turn to the writings of the Promised Messiah(as) to solve every challenge. There are many more examples, but we witness the greatest in the form of his sermons, addresses and discussions. Huzoor(aa) selects precious gems from a limitless and deep treasure and places them before us.

Before I conclude, one more incident needs to be mentioned.

This dates back to when the handwritten notes and letters of the Promised Messiah(as) were being preserved. I received a message from the private secretariat in the late afternoon that Huzoor(aa) had called me.

Later, when I reached the office, Huzoor(aa) graciously gave handwritten notes of the Promised Messiah(as) that had been preserved through lamination. Huzoor(aa) said,

“That day, you said that there were now better means of preservation than lamination. So take these and preserve them in a better way.”

As I left the office, the realisation of what had happened kicked in. Huzoor(aa) had, in his possession, preserved handwritten documents of the Promised Messiah(as), but with the intention that there were now better ways of preservation, Huzoor(aa) immediately instructed for them to be preserved.

We were not able to experience the time of the Promised Messiah(as). This is indeed something that saddens us. But this yearning should not let us forget that we are able to experience the time of his Khilafat. At present, we witness the blessed era of his fifth Khilafat. We have amongst us Hazrat Khalifatul Masih V(aa) who has the most love for the Promised Messiah(as).

The safeguarding of relics is a metaphor of the painstaking efforts of Hazrat Khalifatul Masih V(aa) to protect the message of the Promised Messiah(as), the true Islam.

During the fifth Khilafat, the noble sayings of the Promised Messiah(as) are being preserved through print, electronic and social media in such a way, the example of which has never before been witnessed.