Upon the sad demise of Hazrat Maulvi Nuruddin, Khalifatul Masih I(ra) on 13 March 1914, Hazrat Mirza Bashiruddin Mahmud Ahmad(ra) was elevated to the office of Khalifatul Masih on 14 March.

In the 14 March 1919 issue of Al Hakam, the first ever address delivered by Hazrat Mirza Bashiruddin Mahmud Ahmad(ra) after being elected as Khalifatul Masih II was published. Immediately after this address, he took Bai‘at [oath of initiation] from all those present.

The English rendering of that address is presented below. 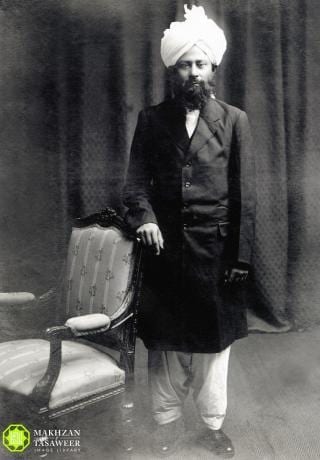 Friends, listen to what I have to say!

It is my belief – my firm belief – that God is one and there is no one beside him. My dear ones, again, it is my belief that Hazrat Muhammad, peace and blessings of Allah be upon him, is the Almighty Allah’s prophet and Khatamul-Anbiya [seal of all the prophets]. It is my belief that no one after him can abrogate an iota of his Shariah [law].

Dear ones! This beloved prophet of mine, the chief of all the prophets, bears such a status that a person who follows him completely and obediently can obtain the status of prophets. It is a fact that the Holy Prophet’s(sa) station and reverence is such that complete obedience to him can result in prophethood. This is my faith and I say it with full conviction.

Then, it is also my belief that the Holy Quran is that beautiful book which was revealed to the Holy Prophet(sa) and it is Khatamul-Kutub [seal of books] and Khatam-Shariah [seal of laws]. Furthermore, it is my belief that the Promised Messiah(as) was the same prophet whose prophecy can be found in Sahih Muslim and the very Imam who was foretold to appear in Sahih al-Bukhari.

I reiterate, no aspect of the Islamic Shariah can be abrogated now. So follow the example of the Companions, may Allah be pleased with all of them, who were the recipients of the prayers and tarbiyat [method of edification] of the Holy Prophet(sa).

The Ijma‘ [unanimity of Companions(ra)] after the Holy Prophet(sa) was manifested in the form of true, rightly guided Khilafat. Reflect and ponder over the history of Islam for the number of achievements during the period of Khilafat when it had taken the form of a monarchy began to fall and it fell to the extent that we witness this state in Islam and the Muslims today.

After 1300 years, Allah the Exalted sent the Promised Messiah(as) on these very precepts of prophethood and in accordance with the promises of the Holy Prophet(sa). After his demise, we see the continuation of Khilafat-e-Rashida [rightly guided Khilafat]. Hazrat Khalifatul Masih, Maulana Maulvi Nuruddin Sahib(ra) was the first successor of this Jamaat (may his status be counted among the highest of high-ranking souls. Allah descend His limitless mercies upon him. May Allah grant him the company of the purest and most beloved souls in Paradise in accordance with the love he had for the Holy Prophet(sa) and the Promised Messiah(as)). We pledged the Bai‘at at his hand with the same belief.

So long as this Jamaat continues to floiurish, Islam will also progress materially and spiritually.

When you repeatedly cried out for me to take this burden and you expressed your desire to take my Bai‘at, I felt that I should state my beliefs before you.

I tell you truthfully, I am fearful. I find myself to be extremely weak. It is stated in a Hadith to not assign one’s servant such a task that cannot be performed by him. At this moment, you have made me a servant. So [I request you] do not ask of me that which I cannot perform.

I am aware that I am weak and not flawless. How can I claim to be a guide for mankind to promulgate the true message of Islam? We are very few and the enemies of Islam are vast in number, however our hopes are extremely high as a result of God’s grace and mercy upon us.

Listen, for the responsibility you have placed on my shoulders can only be fulfilled with your help – pray to the Almighty God for His succour and obey me in obeying Allah and attaining His pleasure.

I am only human and a weak one at that. I vow to the Almighty Allah that I shall pardon your shortcomings; should you notice mine, I request that you forgive them too. Our combined mission – both yours and mine – is to bring about the progress and purpose of this movement.

Now that you have created a bond with me, I urge you to fulfil it loyally. I shall forgive your shortcomings, as you will mine, with the grace of God. You must obey and follow me under amr bil-ma‘ruf [commanding of good]. If – God forbid – I say that God is not one, then I swear by God, Who has full control over decree and our souls and Who is one and has no partner whatsoever, that you should never obey me in such a matter.

I say again, do not disobey me in amr bil-ma‘ruf. If you show obedience and submission and strengthen your oaths, then remember that God’s grace shall be with us and our combined prayers shall avail us.

I have firm faith in my Beneficient Lord; I have full certainty that I shall be helped.

The day before yesterday, on Friday, I narrated a dream in which I saw that I had fallen ill and I felt a pain in my thigh. I felt as though the plague had begun to affect me. I then shut my door and worriedly thought to myself about what was to happen. I thought to myself that Allah had assured the Promised Messiah(as):

“I shall protect all those that dwell in your house.” I thought that although this promise was fulfilled during his lifetime, perhaps it had expired after the Promised Messiah’s(as) demise, as his holy person was no longer amongst us.

During this perturbation, I realised that it was not a dream and I was, in fact, fully awake. I looked towards the walls and the various items in the room.

In that same state, I saw Allah the Exalted in a bright, radiant white light. It started from below and carried on above; it had no beginning or end. A hand appeared from that light, which held a white china cup with milk in it and I drank of that cup. Immediately thereafter, I felt no pain and was comforted.

I only narrated this much of the dream and did not carry on with the second part. I shall now present what happened next.

When I was fed from the cup, the following words were immediately uttered by me:

[My ummah shall never be misguided.]

So pray and strengthen your ties. Make efforts to visit Qadian and come repeatedly.

I once heard the Promised Messiah(as) say,

“Whoever does not come [to Qadian] repeatedly carries the risk of having a defect in his level of faith.”

To spread Islam is our foremost duty. Make combined efforts so that God’s favours and blessings may descend upon us.

I say to you again, and again, and yet again: now that you have pledged the Bai‘at and have formed a bond with me after the Promised Messiah(as), show loyalty and remember me in your prayers. I shall also remember you in my prayers, in fact, I have always remembered you in my prayers. To date, I have not said a single prayer in which the members of the movement were not in mind. However, I shall pray for you even more than before. I have never experienced a passion for prayer in which I did not pray for all Ahmadis.

Listen again! Do not do anything that was done by those who broke their oaths with Allah. Our prayer should be that we live as Muslims and die as Muslims. Amin.