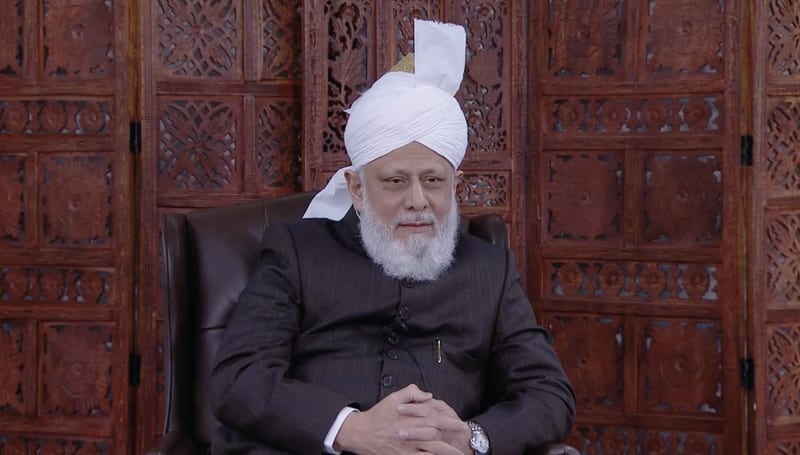 On Saturday, 2 February 2019, a group of Lajna members from the ages of 15-21 had a mulaqat with Hazrat Amirul Momineen, Khalifatul Masih V, may Allah strengthen his hand.

During the mulaqat, this fortunate group of Lajna had the opportunity to ask Huzoor(aa) various questions on current affairs, issues they faced and the Islamic perspective of various matters.

“There is a story behind this mulaqat. A while ago, Hazrat Khalifatul Masih(aa) had instructed the sadr of Lajna Imaillah to visit the northern areas of the UK to observe some of the challenges being faced by the younger generation. Thus, I went and visited areas in the north.

“Upon my return, I submitted a report to Huzoor(aa), upon which Huzoor(aa) graciously said, ‘You invite members of Lajna from other countries, so you should also bring members from the north to meet me.’”

To attend this mulaqat, Lajna from distant places were invited, for example, Midlands, Hertfordshire, Bedfordshire, South West England and parts of Greater London.

A Lajna member from Hounslow asked Hazrat Khalifatul Masih V(aa) regarding his stance on Brexit in light of the current political state of Britain. Huzoor(aa) replied that he had spoken on length on this issue at the European Parliament. Huzoor(aa) then stated that he had voted against Brexit and expressed concern at the current state of affairs.

A question regarding polygamy was raised by an international student from Pakistan who asked Huzoor(aa) why, in today’s modern day, Muslim men were allowed to marry up to four times?

“The question is not about the ‘modern day’, rather it is about certain conditions, and only when the conditions apply can men marry up to four women.”

“During the Second World War, many men lost their lives and the world saw a massive growth in the number of women in contrast to men. At that time, women were frustrated as they were not able to find men to marry. If polygamy was practiced then, this frustration could have been avoided. Only if circumstances permit, is it allowed.”

A Lajna member who is currently studying in school said to Huzoor(aa) regarding non-Ahmadi Muslims who do not observe purdah or use the headscarf that they judge the style of purdah adopted by Ahmadi girls. Regarding this, Huzoor(aa) stated,

“If you know that you are following the true teachings of Islam, then it should not matter to you.”

“You should be confident in what Islam teaches.”

A student from Birmingham informed Huzoor(aa) about her studying law and her aspiration to be a lawyer. Seeking guidance, she further asked what she should do as she read on online platforms of the Jamaat that it was advised for girls not to be lawyers. Reassuring the student of law, Hazrat Khalifatul Masih V(aa) said,

“Complete your degree and [pursue] work, provided you follow the Islamic dress code.”

Regarding the status of women in Islam and the rights of husbands and wives, a Lajna member from Birmingham asked if the status of the husband and wife was equal in Islam. Answering this, Huzoor(aa) said:

“They have their equal rights, but there is a division of labour and duties. The husband’s duty and responsibility is to work outside and provide for the family, and the wife’s duty is to look after the children and take care of the house. However, if a woman has a professional degree in a certain field, she is permitted to work too, provided that the job is beneficial for human beings and not for the sake of earning money.”

Talking about the changes Islam brought about for mankind, Huzoor(aa) further stated,

“…Islam has given the right of divorce to women, which no other religion has given. Women also have the right to inherit property as well as many other rights, which prior to Islam, women did not even have.”

A Lajna member from Luton asked what it meant from the Hadith in which the Holy Prophet(sa) said that the soul remains in this world for forty days. Huzoor(aa) replied:

“This should not be taken in the literal sense. As soon as man dies, the soul is raised. The meaning behind this Hadith is that in the first forty days, after the demise of a person, people should pray for the deceased in abundance that God may have mercy on their soul. This is not to say that after forty days the prayer for the deceased is idle; forty days was said just so a habit of praying for the deceased be formed within Muslims.”

Another student asked regarding how one could prepare for exams during the month of Ramadan. Huzoor(aa) stated,

“If you feel like you cannot do justice to your fast or cannot focus on your studies and exams whilst fasting, then it is permissible to leave your fast, and after your exams, you can complete it another time.”

Following this question, a Lajna member expressed that her favourite subject was geography and wished to specialise in this field. She further enquired if she would still be able to help the Jamaat whilst working in this field. Huzoor(aa) firstly expressed his delight that she was interested in geography and stated,

“There are many ways one can serve the Jamaat. Even if you can’t help within this field, you can do so in other ways.”

Hazrat Khalifatul Masih(aa) gave the example of Prof Abdus Salam Sahib who studied physics and said that he was able to do tabligh and spread the beautiful teachings of Islam even whilst working in his field.

“The feedback that we received after the mulaqat from the Lajna who attended was overwhelming. I received many positive text messages.

“In previous mulaqats, Huzoor has always encouraged girls to be open about the challenges and questions they may be facing. Recently, Huzoor said in a mulaqat that if those in attendance were too shy to ask their questions, then they should write him their questions. Accordingly, many girls wrote to Huzoor(aa) and received letters spanning multiple pages in response.

“Huzoor has always been accessible for the youth and this mulaqat was just one example of that.”

This fortunate group of Lajna had the blessed opportunity to sit in the presence of our beloved Imam for guidance and to ask questions on various subjects. Throughout the year, many are fortunate to travel and have an audience with Hazrat Amirul Momineen(aa) in which they are able to seek guidance on various matters.

Through Al Hakam, we try to provide our readers all around the world with the essence of such mulaqats. Although those who live far away cannot physically be with Huzoor(aa), but can stay up to date with our beloved Imam’s engagements.

May Allah bestow our Imam with an army of loyal servants who are ever ready to defend the honour of Islam Ahmadiyyat.