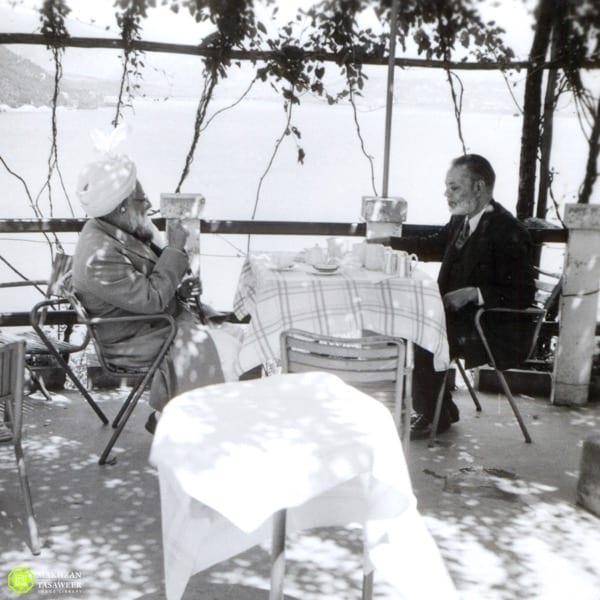 Sir Muhammad Zafrulla Khan(ra) was a Pakistani politician, diplomat, and international jurist, known particularly for his representation of Pakistan at the United Nations (UN) as well as being a devout Ahmadi Muslim and a companion of the Promised Messiah (as). Zafrulla Khan (ra) studied at Government College in Lahore and received his LL.B. from King’s College, London University, in 1914. Upon the independence of Pakistan, Zafrulla Khan (ra) became the new country’s minister of foreign affairs and served concurrently as leader of Pakistan’s delegation to the UN (1947-54). From 1954 to 1961 he served as a member of the International Court of Justice at The Hague. He again represented Pakistan at the UN in 1961-64 and served as president of the UN General Assembly in 1962-63. Returning to the International Court of Justice in 1964, he served as the court’s president from 1970 to 1973.

In the following pages we feature some of the blessed personal qualities of Hazrat Mirza Bashiruddin Mahmud Ahmad (ra) as explained by Sir Muhammad Zafrulla Khan (ra).

‘Hazrat Mirza Bashiruddin Mahmud Ahmad, Khalifatul Masih II, Head of the Ahmadiyya Movement, occupies a unique position in the world of Islam. He is one of those personalities who appear on this earthly stage at long intervals and not only leave a deep impress upon their own generation and age but give a direction and purpose to human effort and endeavour which continue to regulate them for centuries.’

‘He combines in his person qualities which rarely find themselves in companionship. He is both a poet and a man of science; he is an idealist and a man of action; he literally sees visions and then works hard and unceasingly toward their fulfilment. He leads a life of contemplation and yet is the most courageous leader in action. Nothing is too small for his attention and nothing too big for his achievement. He is the most affectionate of masters, the sincerest of friends, the most cheerful of companions and the wisest of counsellors. He occupies the highest spiritual office in Islam and leads a life simple almost to austerity and entirely free from ostentation. He bases his life on Faith, lives it in truth, simplicity and sincerity, and justifies it by courage, perseverance and achievement.’

At another place he says:

‘He possesses a very pleasing personality and a very charming address. He is the very soul of courtesy and kindliness and regards the exercise of true hospitality as a cardinal virtue. In his speeches as well as in his writings he seeks to convince by persuasion, exposition, interpretation and argument rather than by authority.’ 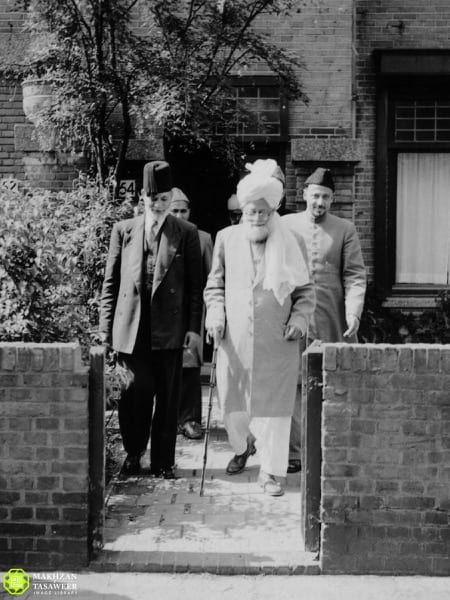 Sir Zafrulla Khan(ra) and His Holiness Hazrat Mirza Bashiruddin Mahmud Ahmad(ra) in Holland during a tour of Europe in 1955. 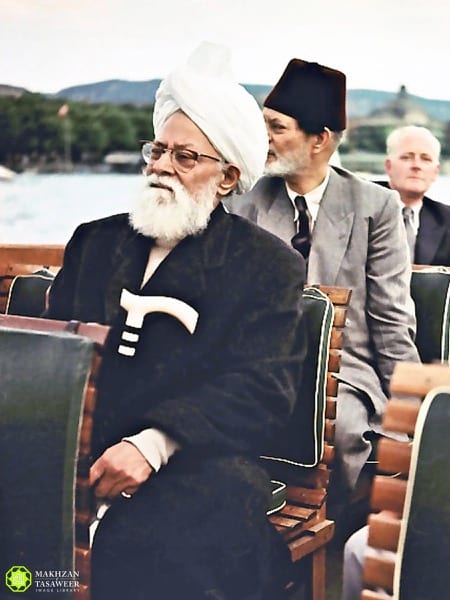 Sir Zafrulla Khan(ra) can be seen sitting behind His Holiness Hazrat Mirza Bashiruddin Mahmud Ahmad(ra) during his tour of Europe, 1955.

‘Every moment of the time that one is privileged to spend in his company is an education in itself. While he is at headquarters, his evenings are spent in the mosque where between the evening and night prayers he gives public audience. At this time the humblest and the most exalted, the stranger and the friend, the Muslim and the non-Muslim are alike made welcome and are admitted to the highest intellectual and spiritual fellowship as equals. Questions are freely asked and he examines the most complicated problems, reduces them to their simplest elements, and brings them within the grasp of the commonest intellect present. One always comes away from these audiences in a mood of intellectual stimulation and spiritual exaltation, and yet with a feeling of regret that the experience should have been so brief.’

‘Among his own people he constantly inculcates integrity of belief and conduct and conformity of conduct to belief as the highest virtues. His own personality is many-sided and his activities are multifarious, but there is no contradiction or inconsistency to be discovered anywhere. He has, as already stated, a poor academic record and yet he is the most deeply cultured man in the country and has probably the widest range of studies. He possesses a well-stocked library in Arabic, Urdu and English. He has performed the pilgrimage to Makkah and has travelled to the countries of the Near East and Western Europe. He keeps himself abreast of all current topics of public interest. His chief source of inspiration, however, is the living Word of God contained in the Holy Qur’an and he also draws much enlightenment from the revelations vouchsafed to the Founder of the Movement as well as from his writings. He is much given to devotion and contemplation and is himself the recipient of revelation. Many of his visions and revelations relating to the present war and other matters have already found startling fulfilment.’

About the position of a caliph

‘It will be readily perceived that the position which the Head of the Ahmadiyya Movement is called upon to fill is not an easy one, and that to sustain it with success the Khalifah must possess talents of a very high order and a combination of qualities which is rarely to be met with in a single individual. That the present Khalifah is more than amply endowed with these talents and qualities has been demonstrated beyond doubt during the 30 years of his Khilafat that have already elapsed. To attempt a detailed description of these would amount to writing a detailed history of the [Ahmadiyya] Movement during the second Khilafat. One may, however, give some indications of the ideals aimed at and the policies pursued by him to achieve those ideals. In one word, his ideals are the ideals set before its followers by Islam, and his policies are the policies dictated and inculcated by Islam. When one proceeds therefore to describe what the Khalifah is seeking to achieve and how he is seeking to achieve it, one would merely be describing what Islam requires of Muslims at the present day and how it requires them to set about it. The principles and policies are not new as the professed objective of the Founder of the Movement and consequently of his successors has been and must be to expound and put into practice the teachings of the Holy Qur’an and the Holy Prophet (on whom be the peace and blessings of God).’

In the words of Sir Muhammad Zafrulla Khan (ra):

‘His (Mirza Bashiruddinra) anxious and solicitous nurture of the tender plant (the Ahmadiyya Community) that was committed to his care so many years ago has by now converted it into a firm-rooted tree with wide spreading branches affording grateful shade and secure shelter and bringing forth healthy and abundant fruit. The winds of opposition and persecution continue to blow and at times they rise to a hurricane, but this sturdy tree under the wise and fostering care of its ever alert and watchful Keeper stands four-square to all these opposing winds, and far from endangering its security they merely serve to add to its strength and beneficence.’

His Holiness Hazrat Mirza Bashiruddin Mahmud Ahmad(ra) with esteemed companions at the ‘The Conference of Religions Within the Empire’, held at the Imperial Institute, London, 1924. Sir Zafrulla Khan(ra) sits to the right of His Holiness.

‘In the political field, in the face of severe criticism and bitter opposition and at the risk of being gravely misunderstood, he has throughout continued to uphold the doctrine that Islam does not permit rebellion by its subjects against a government established by law, and that the law must be obeyed in all circumstances. If a government is tyrannical or a law is vicious or harmful, changes and modifications must be sought by persuasion and conviction through constitutional and peaceful means and not by force or resistance through rebellion or revolution. It has often been put to him that the method of reform in the government or the law advocated by him might prove inefficacious or too slow, but nobody has ever succeeded in moving him from the position consistently held by him. On the other hand, as President of the All-India Kashmir Committee, he was able successfully to demonstrate the efficacy of his principles.’

Sir Muhammad Zafrulla Khan (ra) further says: ‘He regards it as one of the primary duties of a state not only to secure order in its territories and to provide conditions of equal opportunity for all sections, but also to make adequate provision for every one of its subjects in respect of food, clothing, shelter, a minimum standard of education and instruction, health services and amusement.

In the field of international cooperation, he believes in the ultimate evolution of a world federal organization with member states, sovereign within their own territories concerning their special and particular interests and problems, but knit together in one organization for securing more completely and effectively that which may be the common concern of all of them. In the meantime, he considers that all that tends in that direction should be encouraged and fostered.

He believes that international peace and prosperity cannot be secured so long as there is in any part of the world political domination or economic exploitation of any one people by another. Self-determination in the political field establishing complete freedom and equality among nations will alone secure peace and the fullest economic cooperation will alone secure prosperity.’

The diversity of his writings and speeches

‘He is a prolific writer and indefatigable speaker. His writings and speeches range over a very wide field and comprise almost every aspect of human activity. His greatest work and that which is likely to furnish guidance to and mould the lives of generations to come is the At-Tafsīr-ul-Kabīr, an exhaustive commentary on the Holy Qur’an on which he is at present engaged and one volume of which has already been published and another is going through the press.’

‘In other writings and speeches he has explained the significance of the cardinal doctrines of Islam, like the Existence and Unity of God, the significance and functions of angels, the doctrine of predestination, salvation, etc.

Some of his writings have been addressed direct to heads of state and other eminent persons, inviting them to accept the truth of Islam and of Ahmadiyyat. Among these are booklets prepared for and presented to H.R.H. the Prince of Wales (now the Duke of Windsor), H. E. Lord Irwin, Governor-General of India (now Lord Halifax), His Majesty Amir Amanullah Khan of Afghanistan and H.E.H. the Nizam of Hyderabad. Several of his speeches have been devoted to illustrating the excellences of the Holy Qur’an and its teachings. One of them expounds the philosophy of dreams. Those who have been privileged to listen to his public speeches will bear testimony to the power he is able to wield over his audiences through the sheer force of his reasoning, the aptness of the illustrations employed by him, his appeals to the nobler sentiments of his audience and the ideals that he persistently holds up before them. He is the unsurpassed master of exposition and interpretation and often holds huge audiences spellbound for hours at a stretch while he proceeds to expound at leisure and in detail the thesis he has chosen for the occasion.’