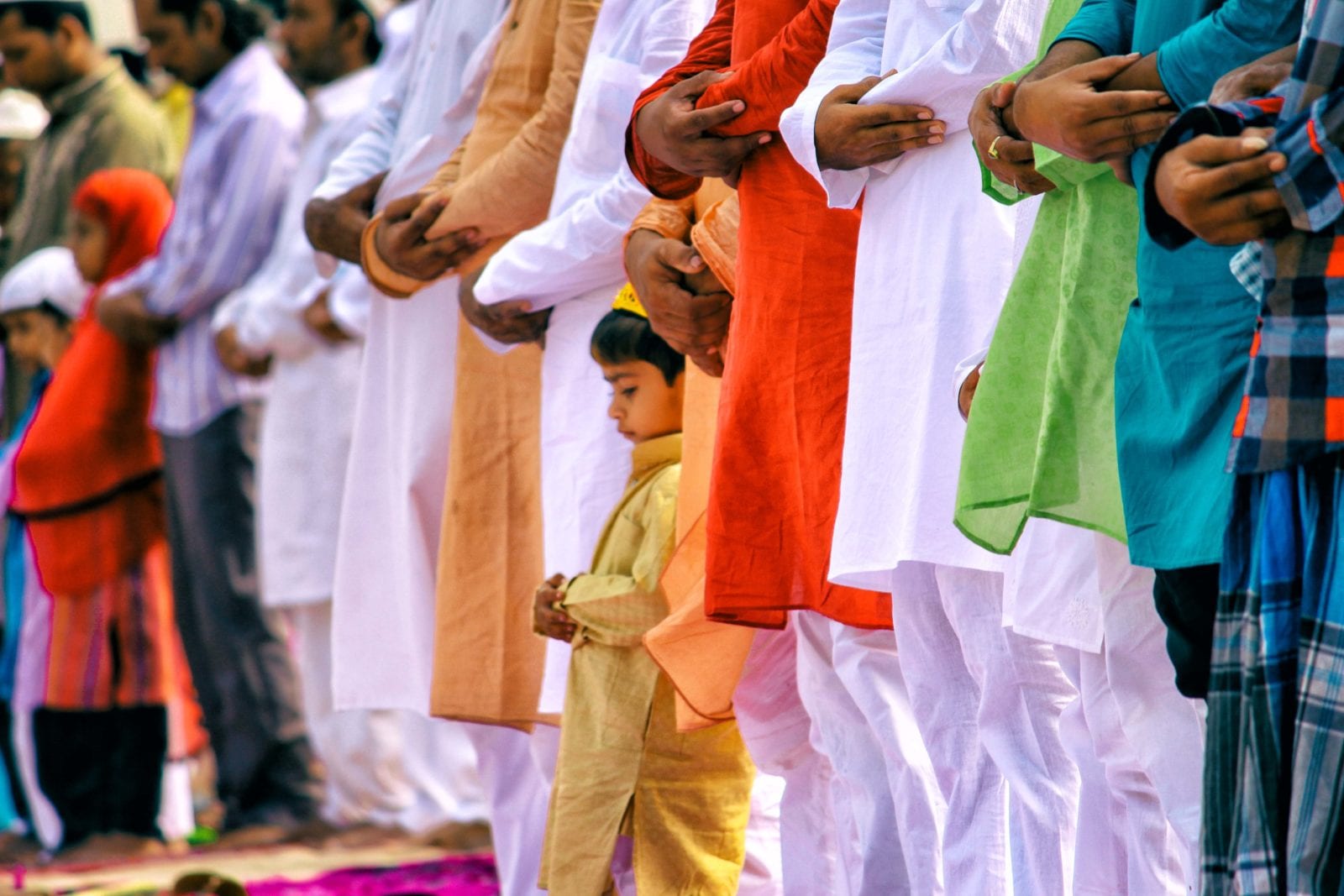 Islamic funeral prayer or “Janaza prayer” as it is called consists of Imam standing in front of the body with congregation behind him lined up in odd number of lines. Imam says loudly Allah-o- Akbar (God is the greatest) and the whole congregation stands with their arms folded. After a few moments the Imam repeats Allah-o- Akbar again, then a third time he repeats the same words. At the fourth Allah-o- Akbar, he says Assalaamo Alaikum Warahmatullah twice and the prayer is over. Odd number of lines signifies the unity of God that is an odd number.

A person, who is not familiar with the Islamic prayer service, watching the service would assume that the congregation is having few moments of silence for the deceased in between announcements of Allah-o-Akbar. The fact is that Islamic funeral service includes the three most wonderful, all-inclusive prayers ever offered in any religion. They are not standing quiet in between the Imam’s words but praying for whole mankind including the deceased.

First Part of the Prayer:

At the first Allah-o- Akbar, we recite Surah Fatihah, the first chapter of the Holy Qur’an. These are oft-repeated seven verses which were prophesized in the Bible and are the essence of the Qur’an. These verses say:

“In the name of Allah, Most Gracious, Ever Merciful. All praise belongs to Allah, Lord of all the worlds. Most Gracious, Ever Merciful, Master of the Day of Judgement. Thee alone do we worship and Thee alone do we beseech for help. Guide us to the right path, the path of those upon whom Thou has bestowed Thy blessings, not of those who have incurred Thy displeasure, nor of those who have gone astray.”(Surah Fatihah)

These verses describe the Deity we believe in and His main four attributes. He is the Lord of the worlds, Gracious, Merciful and the Master of the Day of Judgment. Then we describe what our relationship is with Him. We are dependent on His help for all matters and that is the reason we only worship Him. At the end, we ask Him to guide us so we can be counted among His favorites, rewarded by Him. We also ask Him to keep us away from the path of those who incurred His displeasure or the ones who after starting on the right path went astray.

Surah Fatihah is a prayer that is recited in five daily prayers (Salat) by all Muslims and is required reading for our Salat to be complete. All attributes of God are inclusive and summarized in the four attributes of God mentioned in these verses. It is the opening chapter of the Holy Qur’an and is considered the summary of the whole book. Its blessings have been described in numerous Ahadith (sayings of the Holy prophet Muhammad).

Second Part of the Prayer:

After the second Allah-o-Akbar call of the Imam, we recite the following that is known as the “Darood Shareef”:

Darood is a complete prayer in itself. There are two components to any prayer. We pray for something such as health, wealth, forgiveness etc. The other component is that we are praying for someone. It could be a relative, a child or our self. Darood has both these components covered. We pray for blessings and prosperity which covers all kinds of needs such as health, wealth etc. If we have God’s blessings and prosperity, we do not need to ask for anything else. As far as the second component is concerned, we pray in the Darood for the people of Prophet Muhammad, which would include our relatives, children and ourselves. So we don’t need to name any of them.

Although many sages have discussed this beauty and significance of Darood, it is not advisable for everyone to limit himself or herself to it and not indulge in other specific prayers. Everyone is not capable of having the focus or deep understanding of this philosophy to be able to concentrate and achieve the proper result.

Third Part of the Prayer:

After the third Allah-o-Akbar, we recite the prayer taught by Holy Prophet Muhammad for funerals:

This prayer is so inclusive of all human beings without regard to their faith, ethnicity, race, color, creed or gender that no other religion can produce a prayer like it.

All human beings on this globe are in a march like a caravan moving towards God. Some of us will get there sooner and some later. Some would pass away to their destination while they are young and some at an old age. However, everyone in this global caravan will reach the same destination. Therefore, we need to pray for everyone in this caravan.

The prayer starts with seeking forgiveness for the living ones and the deceased ones. This is for all human beings who are living at this time or who have passed away in the past.

The forgiveness is being asked for those who are present, meaning people that are around us and are present in our life. It would include our relatives, family, friends, neighbors, colleagues and even strangers that we see around us. We also seek forgiveness for those who are absent (from our lives). This covers the people around the globe whom we do not recognize and do not have any contact with because they are not related to us nor have any contact with us.

We also seek forgiveness for the young and the old ones. We also include all females and males. In our seeking of forgiveness gender or age does not matter and this prayer includes all these categories specifically and clearly.

At the end of the prayer, we ask for two things from Allah. One is that we should keep on getting benefits from whatever the deceased has done for us. The other thing that we ask is Allah should help us so going through the experience of one departing us does not become a trial for us.

When a close relative passes away, especially at a young age, we can have thoughts that in fact can be complaints to God. How could God do this? Why could he not live a normal life? How can God be so cruel (God forbid) to put us through this ordeal? All these thoughts become a trial for us and can result in pushing us away from God. We know that all of us are going to pass away and some are going to leave at a young age. That is the system of nature created and established by God. However, we need God’s help in coping with the trauma. That is precisely what this prayer is for.

At the fourth calling of Allah-o-Akbar by the Imam, the prayer is over.

As far as the prayer being said quietly and not be recited loudly by the Imam, there is also wisdom in it. Funeral service is an emotional time. Relationship with the deceased is directly proportionate to the hurt and pain one feels at the funeral. Some people cannot hold their emotions and would cry openly and that takes attention away from the wonderful prayers that are offered. So everyone is taught to pray quietly, keeping their emotions to themselves and seeking forgiveness and asking God’s help at the time of loss.

Women not allowed at burial site:

It was the instruction of the Holy prophet Muhammad that women should not go to the burial site. This needs some explanation since some people try to make this a gender issue. They infer that Islam does not give equal opportunity to men and women. This instruction has nothing to do with equality of sexes.

As a general rule, in Islamic teachings, it assigns any physical work that has to be performed outside the house to men. Making a living, working in public projects in the open and anything requiring labor is assigned to men. Physical work within the house such as cooking, taking care of the babies, and training of children is assigned to women.

At the burial site, it is a laborious work to dig the grave, lower the body inside it and then cover it with dirt. This work belongs to men. Women do not need to do any of this work. In addition, generally women get more emotional at these occasions as compared to men, so it is better if they do not see the whole process of burying their beloved one. It can be traumatic.