A prophecy fulfilled – The Tsar in agony and distress – Part I 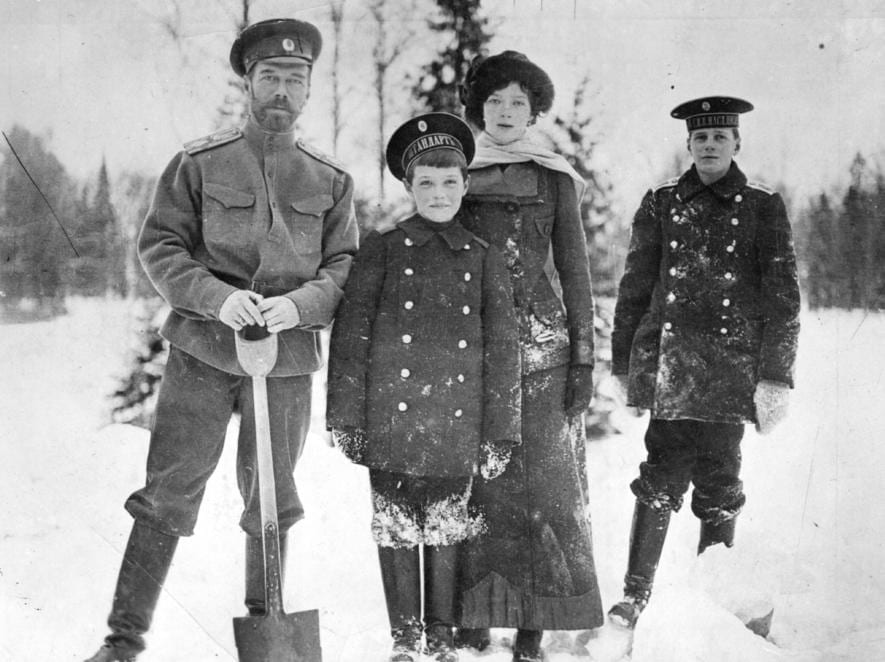 In the remote village of Qadian, India in the year 1905, a humble man was blessed with true visions and given knowledge of the unseen as God spoke to him.

Hazrat Mirza Ghulam Ahmad(as) claimed to be the Promised Messiah and Imam Mahdi who was to come in the latter days. In one of his poems, he foretold various signs: a formidable “earthquake”, a catastrophic tribulation that would shake the world and the immense misery that would fall upon Tsar of Russia.

At that time when this prophecy was made, few could have believed such misfortune would fall upon humanity let alone the Tsar – the ruler of the largest and one of the most powerful nations of that time. However, this prophecy proved to be true, manifesting in the First World War and the miserable end of Tsar and his family.

Travelling back in time and reaching the end of 19(th) century, we can explore the extraordinary lives, the agony and trauma and tragic deaths of the last Tsar of Russia, Nicholas II and his family.

The exhibition in the Science Museum, London is set up from 21 September 2018 to 24 March 2019 to reveal the turbulent backdrop of social upheaval and war between 1900 and 1918.

Facts have been disclosed about the rare blood disorder of the Tsar’s son Tsarevich Alexei, mental health of Tsarina and the fear and anxiety of the Tsar to uncover the science behind one of the greatest mysteries of the 20(th) century; all this in The Last Tsar, Blood and Revolution exhibition.

Today, some of the striking buildings in Russia are in the city of Saint Petersburg located on the Baltic Sea. It was the imperial capital for two centuries and established by Tsar Peter the Great in 1703 CE, who named it after his patron Saint Peter, so it was called Saint Petersburg instead of Nyen, which was its previous name.

The city’s first building was the Peter and Paul Fortress. In 1712, Peter the Great moved the capital from Moscow to Saint Petersburg and wanted to make it a defensive city for Russia. Until today, it has had a sinister history and never served its defensive purpose.

Another significant building is Saint Peter and Paul Cathedral, the burial place of all tsars from Peter I to Alexander III (but not Peter II). However, the remains of the last tsar, Nicholas II and his family and entourage were re-buried here in the side chapel of Saint Catherine on 17 July 1998, the 80(th) anniversary of their death.

Today the icon of the city is the tall tower of the fortress seen across the Neva River. An important city worth mentioning is Yekaterinburg that lies east of the Ural Mountains. It was given this name by Tsar Peter the Great after his wife Yekaterina, who became Catherine I after Peter’s death.

Today the significance of this city is that following the Oct Revolution the family of the deposed last Tsar Nicholas II were sent to internal exile in Yekaterinburg where they were imprisoned in the Ipatiev House. The city is known for the golden-domed “Church on the Blood”, built in the early 21(st) century on the site of the 1918 Romanov executions. The nearby Regional Local Lore Museum includes the “Hall of the Romanovs” where the personal items of the last Tsar and his family are kept.

The Russian Imperial family called Romanov started their rule in 1613 and continued until 1917. Peter the Great (1672-1725) brought autocracy into Russia and played a major role in bringing his country into a state system. Russia became the largest country in the world, stretching from the Baltic sea to the Pacific Ocean. He founded the city of Saint Petersburg and made it a capital, thus opening a window into Europe. Later an autocracy and orthodoxy developed in the Imperial rule and there was no question of democracy, constitution and the parliamentary system at the end of 19(th) century during the time of Alexander III (1881-1894) who was succeeded by his son Nicholas II (1894-1917). But the Industrial Revolution was gaining power to exert a significant influence in Russia that ultimately brought an end to the Imperial rule. Such a tragic and brutal end of the last Tsar was beyond imagination.

In 1894, 26-year-old Romanov Nicholas II ascended to the Russian throne. He was married to Alexandra, a German lady and Queen Victoria’s granddaughter. It was a loving family with four healthy daughters. In his diary, Nicholas wrote:

“No more separation. At last, united for life and when this life [ends], we [shall] meet in the other world to remain together for all eternity.”

But the first ten years of their reign were marked by great pressure to provide a son and a heir. A person like Nicholas II who was not only emperor but had a number of titles – including By the Grace of God Emperor Nicholas II, Autocrat of all Russians (on one silver ruble coin), Tsar (an archaic Slavic title), Great Authority and Power – was greatly upset and disturbed without a son.

As for Tsarina, she was under great stress to give the nation a male heir – the future supreme ruler of Russia. With the birth of each daughter, her stress and anxiety increased. Her husband Tsar Nicholas II was worried and sought treatment from experts. Her anxiety was treated with gentle medications and spas prescribed by physician Eugene Botkin (1865-1918). As time passed, Tsarina lost trust in professional medication and found comfort in faith and spiritual healing. Rumours suggested she suffered from nervous problems.

Under the Russian autocratic system, health care was provided by the church, private charities and local government. Although care was inconsistent, many hospitals and asylums adopted progressive principles that abolished restraining pressure from those with mental illnesses. But that was not the case for political prisoners.

As the socialist Marxist policies grew, a number of women were imprisoned, and many struggled in solitary confinement and against abusive male guards. Those who showed signs of anxiety were labelled hysterical and many were driven to suicide.

In the Science Museum, London exhibition is displayed the case of a 26-year-old student Maria Ventrova (1870-1897) who was detained in complete isolation at the Trubetskoy Baston Prison where you never hear any sound. Maria set herself alight with kerosene from a lamp and died from burns four days later.

This was not an isolated case. There was an “epidemic of suicide” and “revolutionary psychosis”. There were political factors as causes of mental health. But the psychological problem of Tsarina was due to great pressure from the state to have a heir for the empire. A professional medicine could not have produced a male, so spiritual healers flooded the Imperial court.

Heir for the monarchy

Tsar Nicholas II struggled to find any “spiritual” and “mystic” healer for Alexandra Tsarina to bring her out of mental stress and save his own monarchy.

In 1902, Monsieur Philippe, a so-called “miracle worker”, promised her a son, but the result was Tsarina’s “Phantom pregnancy”. It was declared that her mental state was due to some “divine powers” on “blessed souls”.

In 1904, Alexandra was blessed with Tsarevich Alexei, long awaited son and heir to Imperial Russia. But sadly, this happy jubilation turned to horror. Alexei contracted a rare blood disease called haemophilia where blood clotting is very difficult. Tsarina Alexandra was horrified as she knew it was a “royal disease” in the family of her grandmother Queen Victoria and knew that her uncle, brother and nephew had died of this disease. The news threatened to destabalise Russia. Knowledge of Alexei’s condition was kept as a state secret. The Tsar family was plunged into great fear anxiety and distress. In Nicholas II’s diary (that is displayed in the Science Museum exhibition) the birth and first bleeding episode of Alexei has been written.

Agony and fear of Tsar

The news of Alexei’s haemophilia threatened to destabilise Russia and fear gripped the Tsar and his family. Knowledge of Alexei’s condition was to be guarded as a state secret. In Russia, any disability was perceived as a divine punishment. The future tsar, who would serve as head of the church and country, should not have any disability. So, the haemophilia of Alexei was concealed from the court and public and his photos were carefully displayed. In public, he was carried by his father or safely on a royal carriage. There was never an official statement about Alexei’s condition. But when the Tsar was on holiday in Spala (present Poland) Alexei experienced a near fatal haemorrhage during a boat accident and his condition was published in 1912.

In the Science Museum, London a picture of the Tsar with the royal doctor Eugene Botkin on board the Imperial yacht is on display and the date mentioned is 1908.

Finding comfort in the closeness and safety of their family, the Tsar and Tsarina left the capital and withdrew greatly from their court life and made a comfortable home at their countryside residence. The public life of the family was secluded. Protected from the vast country they ruled, the Romanovs were gradually losing touch with it.

Alexei experienced painful haemorrhages and professional help was of little use. The agony and distress of the Tsar took him to find natural and spiritual healers who flooded the palace. The last and most notorious was Grigori Rasputin.

His power and influence on the Tsar mystified the nation. Curiosity and suspicion led to outrage as the nation was not familiar with Alexei’s condition. Rasputin considered himself a “natural healer” and was regularly visiting the Imperial family. His ability to settle Alexei’s bleeding secured his friendship with the Tsar and Tsarina. He was very unpopular at court and with public. His presence gathered rumours and damaged the Imperial family.

The agony and suffering, anxiety and distress of the Tsar was mentioned by Maurice Paleologue, French Ambassador to Russia in his diary which is displayed in the Science Museum, London:

“During recent months, [the] Emperor suffered from nervous maladies which betray themselves in unhealthy excitement, anxiety, loss of appetite, depression and insomnia. The Emperor would not rest until he had that quack Badmaeu.” (Diary of Maurice Paleologue, 6 November 1916)