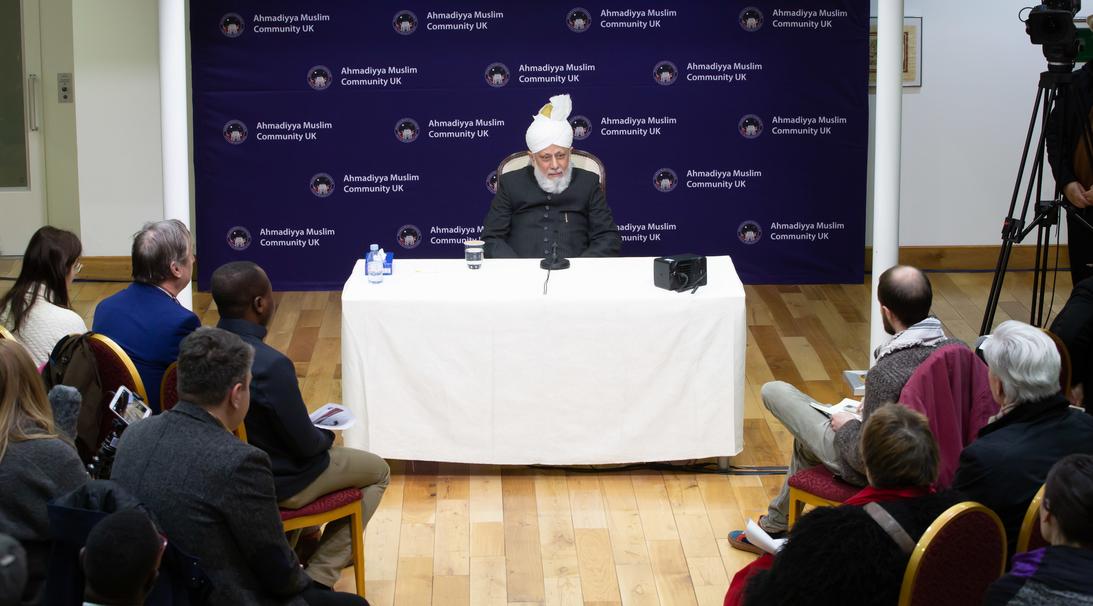 Prior to the keynote address of Hazrat Khalifatul Masih V(aa) at the 2019 Peace Symposium at Baitul Futuh, London, a press conference was held that hosted an entire spectrum of questions, especially since the media wanted to take the opinion of a Muslim Leader on matters related to Islam.

The on-going issue of jihadis returning to the UK was also brought up a couple of times with regard to what manner of action the British Government should take?

Huzoor(aa) stated in the case of one particular female jihadi wanting to return to the UK:

“I have sympathy for the child”,

referring to the new-born child of the jihadi who was innocent in the mother’s crimes and who later died. He also stated:

“If the British Government has stripped her of her nationality, then another country should adopt her, any Muslim country … Since her parents were from Bangladesh, the first duty is of Bangladesh to take her as a national.”

A question that came up was with regard to the purpose behind building the Baitul Futuh Mosque. Huzoor(aa) stated:

“I have been speaking on this issue for so many years. If they are Islamic extremists, then they are not practicing Muslims.”

Hazrat Amirul Momineen(aa) further cited the example of the Holy Prophet Muhammad(sa) entering into the treaty of Medina with other religious groups in order to grant religious freedom and emphasised that the Islam he knew never taught extremism.

It has been argued that war, as controversial as it may sound, plays a role in economic growth (the journalist who asked this question gave the example of the economic unity of the EU being a result of war).

When Huzoor’s(aa) opinion on this matter was sought, he responded by disagreeing with such a notion. He stated that if this was to be the case, then all war-torn regions should be economically developed. Especially in the case of an Indo-Pak war, it was apparent that such a scenario would leave nothing but destruction in its wake reaching further than the subcontinent.

“If there is any war – conventional or atomic – then they are going to ruin themselves. There will not be any economic development after the war, rather they will go 100 years back.’

A journalist asked whether we would ever achieve world peace? The answer, in light of present circumstances, was negative.

“We all talk about world peace, but we are not ready to sacrifice ourselves for creating peace in the world.”

Huzoor(aa) added that there would be no peace without letting go of vested interests.

On the matter of a solution to a war between India and Pakistan, Huzoor(aa) commented that the major dispute was over Kashmir, which should be resolved through the UN. If the UN was truly serious and wanted to resolve this issue, then India and Pakistan would be ready.

Huzoor(aa) further stated that the road map for ending this dispute was the one laid out by Sir Zafrulla Khan Sahib(ra).

In recent years there has been a growing interest in Africa with trade and industry growing rapidly. A journalist asked Huzoor(aa) about establishing peace in the African continent.

Huzoor(aa) replied by stating that if the rulers were honest, discharged their duties properly and provided opportunity to all their people then this would lead to peace. The rulers needed to reform themselves.

Furthermore, the case of terror groups gaining strongholds in those countries was also due to the dishonesty of the governments in those regions. Huzoor(aa )pointed out that the resources were not being used adequately to the benefit of the local populace and the rights of the people were also not protected. To summarise, the entire responsibility of upholding peace in Africa was upon the rulers to govern properly. If they did so, then Huzoor(aa) stated that “these extremist groups would die their own deaths.”

On the question of nuclear weapons beings necessary as deterrents, Huzoor(aa) stated that this was just a “flimsy excuse” as nuclear weapons were not saving countries, but destroying them, especially due to the economic disturbances they cause. Huzoor(aa) then cited the example of the Cold War between Russia and the USA.

At the end, Huzoor(aa) gave a light-hearted comment, saying:

“Had you listened to my address before asking these questions, then you would not have asked so many.”

The press conference concluded with Huzoor(aa) meeting dignitaries in the Aftab Khan Library and then proceeding to Maghrib prayer followed by the main function in Tahir Hall.

Huzoor’s(aa) opinions and comments were cited in various media outlets including the Evening Standard, Sky News, the Daily Mail and the Mail Online.