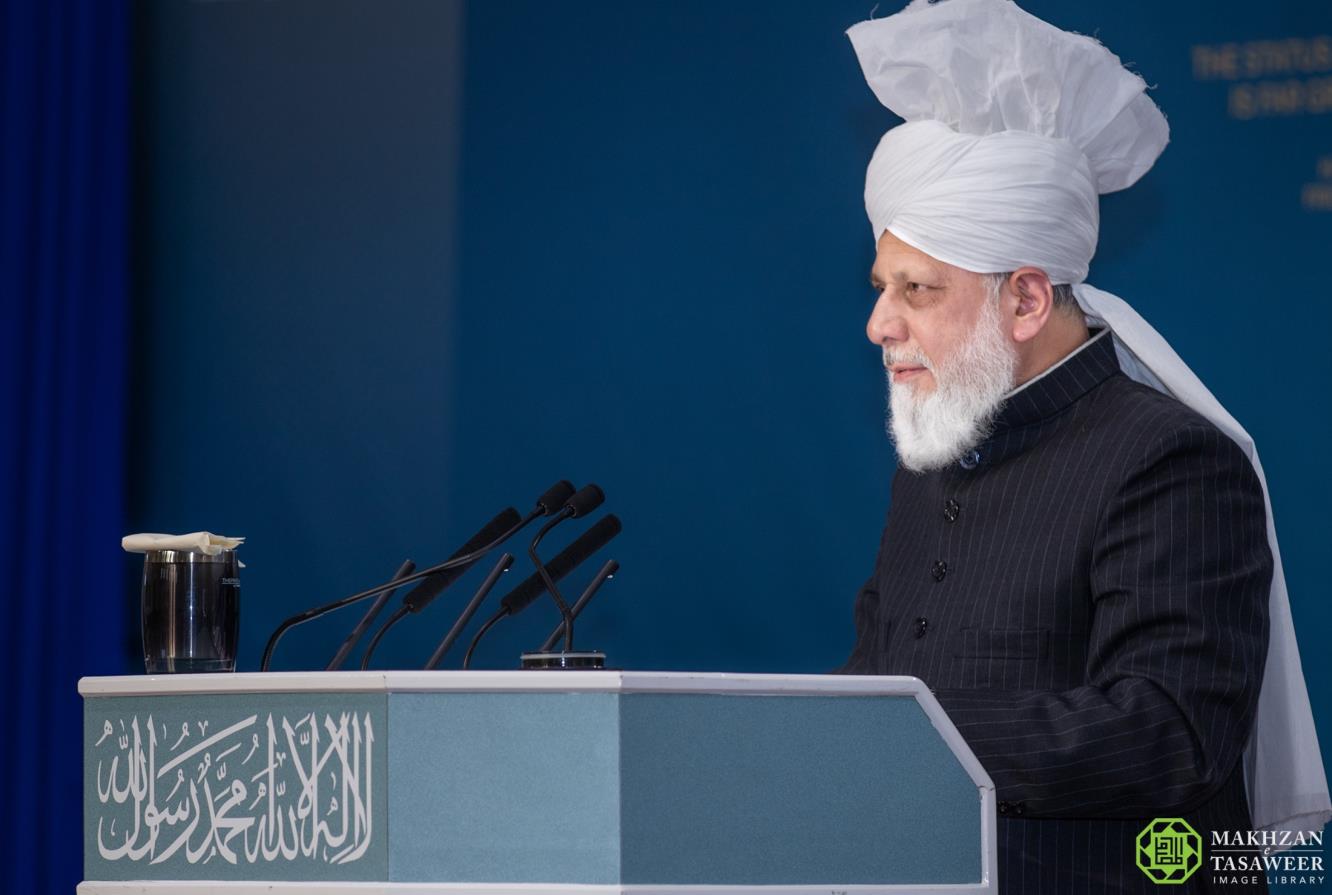 “Disregard any hesitation or fear and stand up with certainty and conviction in the truth of your faith and respond to those who seek to defame its pure teachings.” – Hazrat Mirza Masroor Ahmad

The event took place at the Baitul Futuh Mosque in London and was attended by more than 1100 women and girls.

In his address, His Holiness explained that in today’s society, attacks against Islam, through false allegations and criticisms, were extremely prevalent. In light of this, His Holiness reminded Ahmadi Muslim women in attendance that they must never feel any embarrassment or inferiority complex regarding their faith. He urged them to stand up with certainty and conviction to respond to those who seek to defame Islam.

His Holiness also directed Ahmadi Muslim women to set the highest standards in practicing the teachings of Islam, so that its values remain firmly instilled in future generations. He warned those Ahmadis who do not remain attached to their faith that their own lives will be squandered and their future generations will be lost to the materialistic world.

His Holiness began his address by reminding those in attendance that, although they have grown up in Western society, they are distinct from their counterparts because their parents, prior to their birth, dedicated their future lives for the sake of their faith. As such, they must constantly strive to learn and act upon the teachings of Islam.

“You must offer Salat sincerely and in a state of complete submission to Allah the Almighty and not in a hurried way just so you can claim to have fulfilled your obligation… Certainly, the foremost aspiration of any member of Waqf-e-Nau, indeed of any true Muslim, and of any person who has pledged their life to the service of Islam, should be to attain the nearness of Allah the Almighty.”

His Holiness proceeded to explain that the Holy Qur’an contains universal, comprehensive, and relevant teachings which provide the answer to every charge or accusation made against Islam. As such, Ahmadi Muslim women must read and understand the perfect teachings that Allah the Almighty has bestowed upon us in the blessed shape of the Holy Quran.

“Just as the Holy Quran was relevant and worthy of practice 1400 years ago, it remains the same today. Therefore, all Waqfat-e-Nau must entirely eliminate from their minds the belief that Islam is an ‘old-fashioned’ religion or somehow backward. Instead of being a religion of the past, it is a religion of today and tomorrow and will remain until the end of time, Insha’Allah.”

His Holiness directed members of the Waqf-e-Nau scheme to read the books of the Promised Messiah (peace be upon him) in order to understand the Holy Qur’an’s meanings and to defend Islam. 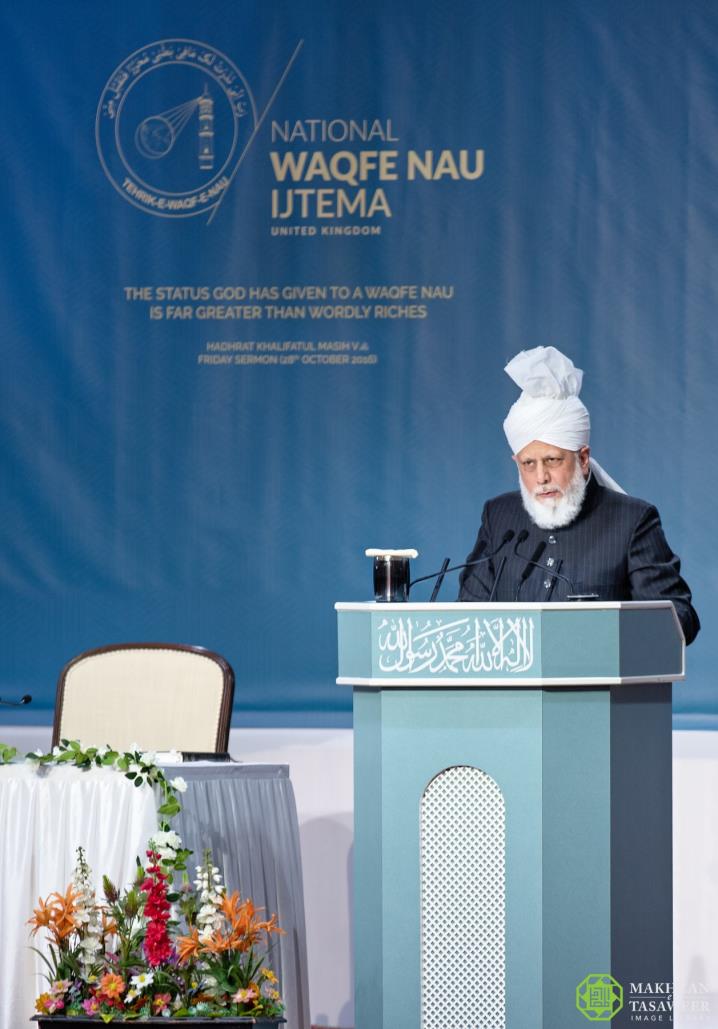 His Holiness said that Ahmadi Muslim girls should remain proud of their faith and never fall prey to the belief that Islam was not relevant or in touch with modern society.

“Never entertain the thought that your religion is somehow backward or out of touch with the modern world.  Conversely, the more you take pride in your religion and the more you live your lives according to the teachings of Islam, the more others will respect you and this is how your honour and dignity will be established in the world.”

His Holiness advised Ahmadi Muslim women to take pride in their faith and never hold “any form of inferiority complex” about their faith.

“There is no Islamic teaching that should cause any complex or apprehension to emerge in your minds. Never worry for a second that others might taunt you or consider you to be a laughing stock because of your religious beliefs. If they mock, let them!”

His Holiness noted that some young Ahmadi Muslims, particularly teenagers

due to the ridicule they witness of their religious beliefs in the wider society.

Guiding the youth to keep their

“If you are ever mocked for acting upon your religion you should never take it as a personal humiliation, rather you should consider it to be a badge of honour and feel pride in the knowledge that you have stayed strong in your faith in the face of adversity. Showing patience and keeping your head held high in such circumstances is the true means of establishing your honour and self-respect in the world.”

Analysing the state of Western society, His Holiness highlighted that most people have lost their true religious identity and of those who still identify as Christians, many are not following its teachings.

“In the name of so-called ‘freedom’, today’s society considers itself to be extremely advanced and progressive and believe they have reached the height of civilisation. Yet, in reality, as society has moved away from religion, moral standards have declined in parallel. In terms of morality and virtue, instead of advancing, modern societies are suffering from deep decay. By separating from God Almighty, humanity is rapidly moving away from basic standards of common decency.”

As an example of the moral decay associated with a separation from God, His Holiness pointed towards the breakdown of the family system.

His Holiness said it has become normalised for children to disrespect their parents, all in the name of ‘freedom’ and ‘independence’, thus threatening the family unit.

Increasingly, His Holiness said, children are being taken into care homes or local authorities and police are being called to resolve domestic issues.

“Is it a measure of success if more children are being taken into social care or if the authorities are being required to act? Is this progress? Is this development? Is this the great achievement of our time? Now, belatedly, society is starting to understand the harmful consequences of absolute freedom.”

“Always remember that the peace of society is directly connected to the peace within families within that society. Peace in the home is based on good morals and mutual respect between a husband and his wife and between the parents and their children.”

Hazrat Mirza Masroor Ahmad also reminded the parents of Waqf-e-Nau children about their responsibilities and said:

“I also wish to remind the parents of Waqf-e-Nau children that they must continually reflect upon the fact that they have pledged their children for the sake of Islam and so if they do not set a pious example for their children they will have failed to discharge their duties.”

His Holiness also said that many women who are members of the Waqf-e-Nau scheme are now mothers themselves and so they must set a personal example of piety for their children to follow and learn from.

“The high status of women in Islam is such that it is only through their noble efforts that the coming generations will remain attached to their faith. Only if mothers play their crucial roles can the great values of our religion remain firmly instilled in our future generations. Otherwise, we could suffer the same fate as other religious communities, who have lost their traditions and values over time.”

His Holiness said that if mothers do not play their vital role, then Mosques too will

just as the places of worship of other faiths. However, His Holiness said that this will not be the case with the Mosques of the Ahmadiyya Muslim Community because it is the Promise of Allah the Almighty that Islam will remain a living religion and it is for this purpose that the Ahmadiyya Muslim Community was established by the Promised Messiah (peace be upon him), to revive the true peaceful message of Islam.

His Holiness emphasised the need for members of Waqf-e-Nau to hold true to Islamic principles in the best manner and said:

“Always remember that, for both believing men and believing women, it is necessary to keep righteousness at the forefront of your mind, which means to strive towards attaining every form of goodness and virtue. Thus, endeavour to be the most truthful, the most hard-working and most faithful servants of Islam. Consider it your lifelong duty to spread the true message of Islam.”

Concluding his address, His Holiness prayed and said:

“May you nurture the generation that lies in your laps in a way that ensures that the Ahmadiyya Muslim Community’s spiritual, moral and intellectual standards continue to rise and that no Ahmadi Muslim child moves away from the teachings of Islam and wastes their life.”