Precious advice to Waqifeen-e-Nau at 2019 Ijtema

Precious advice to Waqifeen-e-Nau at 2019 Ijtema 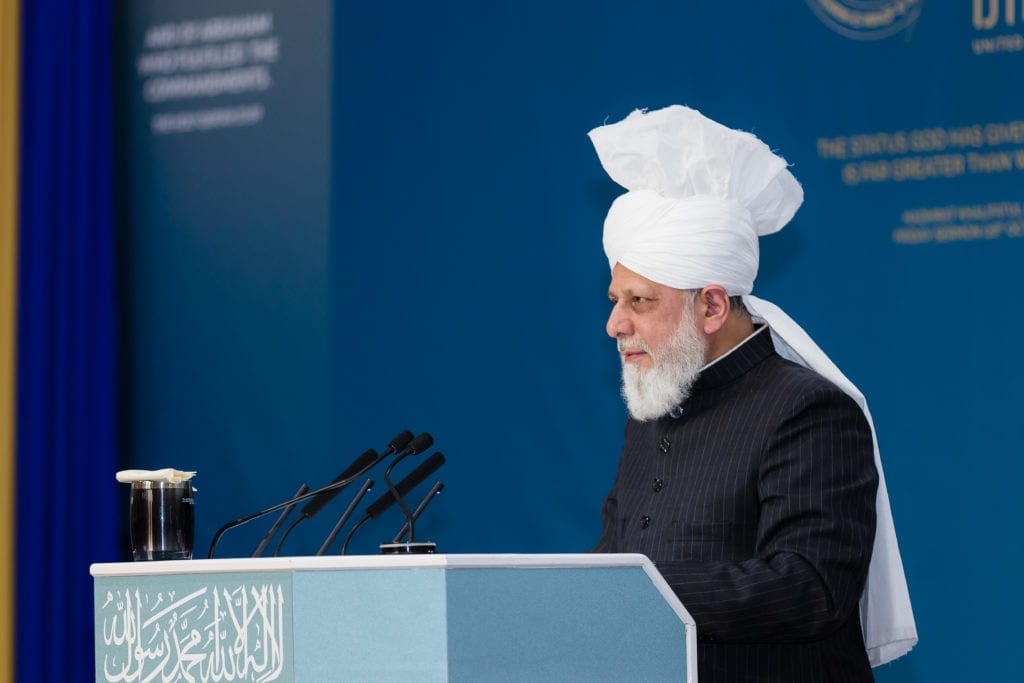 With the recitation of Surah Al-e-Imran, verses 33 to 36 and translation, the UK Waqifeen-e-Nau Ijtema’s concluding session commenced in the presence of Hazrat Amirul Momineen, Khalifatul Masih V(aba) in Baitul Futuh, London on Sunday, 7 April 2019.

In the report presented by the Waqf-e-Nau Department, UK, it was said that the Ijtema had been a means of inspiring the Waqifeen towards various disciplines and careers that they may pursue after they have reinstated their pledge of Waqf.

Along with presentations on Jamia Ahmadiyya, career choices, the true meaning of Waqf, Huzoor’s instructions to Waqifeen-e-Nau in the past, a presentation was also given on the inspirational life of Prof Abdus Salam Sahib by his son, Ahmad Salam Sahib.

An exam was also conducted that assessed the general knowledge and Islamic understanding of Waqifeen.

This year, 1,394 Waqifeen-e-Nau attended, an increase of 30 Waqifeen as compared to last year. Along with guests, the total attendance was 1,725.

Hazrat Amirul Momineen, Khalifatul Masih V(aba) began his speech by saying that it was encouraging to see that the number of Ahmadi parents dedicating the lives of their children to the scheme of Waqf-e-Nau was increasing.

“Some [of you] are in school whilst many have completed their higher education. Having done so, some of you are serving the Jamaat full-time as Waqf-e-Zindagi, whilst quite a number are now posted in the field as missionaries after completing their studies and training from Jamia Ahmadiyya. There are others who, with the permission of the Jamaat, are pursuing various professions, however it is vitally important that those who are working privately must set aside as much time as possible for the service of their religion and should always keep in mind that they are Waqf-e-Nau.”

Hazrat Khalifatul Masih(aba) then emphasised the worship of Allah, establishing a strong bond with Allah and the five obligatory prayers. Huzoor(aba) said that the youth should make every effort to attend congregational prayers at local mosques and Salat centres. Unfortunately, there were some who, when asked, admitted that they did not offer the five daily prayers as is required.

“If you are not fulfilling the basic duty of worship of Allah, how can it be possible to form a relationship of fidelity and sincerity with Him. So, if you want to show that you are not just a Waqf-e-Nau in name and that you have genuinely given your lives for the sake of Islam and are determined to fulfil the pledge made by your parents, you must prioritise this indispensable aspect of your faith.”

Coming back to the Waqifeen, Huzoor(aba) said that to understand what is required of us, we must study the books and words of the Promised Messiah(as).

Huzoor(aba) went on to summarise instructions of the Promised Messiah(as) that he gave to his Jamaat, which included expectations Hazrat Ahmad(as) had of those that had committed their lives to the Jamaat. Thereafter, Huzoor(aba) added:

“…you should understand that even though you are living in a Western society, you must live your lives in an Islamic way, seeking to attain the pleasure of Allah the Almighty. You must resolutely keep hold of your religious values and traditions. You must bring about those pious changes in your life that will enable you to fulfil the rights of Allah the Almighty and His creation.”

“I have no doubt that if the members of Waqf-e-Nau are able to collectively follow his example even to a very small degree, they will be able to bring about a spiritual and moral revolution in the world.”

Hazrat Khalifatul Masih V(aba) explained that as the younger Waqifeen entered adulthood, they should remember that it was not essential that they would be immediately called for the service of the Jamaat. In such circumstances, the Waqifeen should not let the world consume them and they should try their utmost to increase their spiritual conditions and religious knowledge.

Regardless of where they work, they should become a practical example of the true teachings of Islam. Only if they do this can they say that they have fulfilled the rights of their Waqf.

Referring to the verse

Huzoor(aba) said that it was essential for all Waqifeen to live their lives with the same loyalty as Hazrat Abraham(as).

“Sometimes, young married couples come to meet me and the husband proudly says that, ‘I am a Waqf-e-Nau’, ‘My wife/husband is Waqf-e-Nau and now, so is our child’. It is good that their entire family is part of the blessed scheme, however, as I have said many times, just holding the title of Waqf-e-Nau is meaningless. It becomes meaningful when a member of Waqf-e-Nau understands the demands of their pledge and faithfully strives to fulfil it to the best of their abilities.

“To honour your pledge requires constant effort, great passion and enormous sacrifices. It requires complete devotion to your Creator. The Promised Messiah(as) once said that the means to gain Allah’s nearness is to manifest complete submission to Allah the Almighty in the way of Hazrat Ibrahim(as) who sacrificed his entire being and tolerated every possible hardship for the sake of Allah. It is for this reason that Allah the Almighty has testified to the obedience and sincerity of Hazrat Ibrahim(as) in the Holy Quran.”

Another instruction of the Promised Messiah(as), Huzoor(aba) described, was that devotion required us to completely immerse ourselves in the service of God’s religion.

Huzoor(aba) said that we must avoid all forms of distractions that take us away from our actual purposes and our devotion to Allah the Almighty.

“All of you should deeply reflect upon this point and assess your own lives to see if you are being taken away from your faith by the many worldly activities and superficial pursuits that are common today. If such material interest causes a person to forget Allah the Almighty, how can he or she claim to follow the example of loyalty and obedience displayed by Hazrat Ibrahim(as) or to reach the standards expected by the Promised Messiah(as).

“Though many Waqifeen-e-Nau are busy with their professions or business, they must not let their worldly work interfere with their worship of Allah the Almighty. Similarly, children who play computer games or have other hobbies must ensure that these pursuits do not lead them to neglecting their prayers and religious duties.”

Just being part of the Waqf-e-Nau scheme, Huzoor(aba) said, is

“nothing to be proud of … until and unless they solemnly strive to reach the high standards of obedience required by the Promised Messiah(as). Until you prioritise your religion over all worldly matters, being part of Waqf-e-Nau is just worthless.”

“…as Waqf-e-Nau, you must be very active members of Atfal-ul-Ahmadiyya and Khuddam-ul-Ahmadiyya. You should be role-models for the other Atfal and Khuddam and be ready for any duty or sacrifice required.”

Alongside the obligatory prayers, Huzoor(aba) said to the Waqifeen that they should also offer nawafil– voluntary prayers. Waqf-e-Nau, especially the older Atfal and Khuddam, should carefully read the translation of the Holy Quran, as well as the commentaries of the Promised Messiah(as) and the Khulafa. The commandments of Allah should be well understood, and only when this is done can one call themselves a good Waqf-e-Nau.

“Compared to girls, boys are more easily influenced by the immodesty and indecency prevalent in the modern society. However, our boys should always guard their modesty and not fall prey to immoral and indecent activities. Only then can you call yourself a Waqf-e-Nau.

“If you are married, you must set the best possible example for your wife and children. Treat them with love and care, and fulfil their needs. Strive earnestly to ensure that the next generation of Ahmadis remains faithfully attached to the Jamaat. Only then can you call yourself a true Waqf-e-Nau.

“Similarly, those of you who are looking to get married should seek pious Ahmadi girls so that your future generations are raised in a righteous environment. Only if you are playing your role in protecting the future of your Jamaat can you call yourself a true Waqf-e-Nau.”

Hazrat Khalifatul Masih(aba) emphasised that along with strong bodies, strong minds were also important to face the many challenges that lie ahead. In terms of tabligh, Huzoor(aba) said that Waqf-e-Nau should be at the forefront. To understand their faith and religion, Huzoor(aba) reminded attendees that the Holy Quran and the Jamaat’s publications and magazines should be studied.

“Always remember that it is the duty of a Waqf-e-Nau to propagate the mission and objectives of the Khalifa-e-Waqt and to be his constant helper. You can only do this if you are completely obedient to Khilafat; only if you are following the guidance and instructions of Khalifa-e-Waqt can you urge others to do the same.”

Towards the end of his address, Huzoor(aba) reminded the Waqifeen to listen to his sermons on MTA and to make those instructions a part of their daily lives.