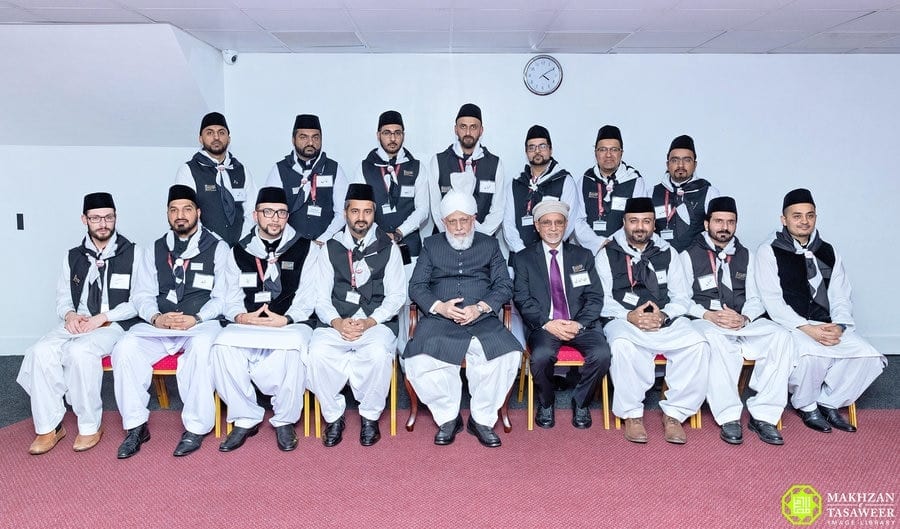 Majlis Atfal-ul-Ahmadiyya Canada visited the Markaz last week, visiting various Jamaat sites including Masjid Fazl, Baitul Futuh, Islamabad and Jamia Ahmadiyya UK. The highlight of their tour was a mulaqat with Huzoor(aa) in which they had the opportunity to ask Huzoor(aa) various questions.

During the mulaqat, Huzoor(aa) caringly asked the Atfal about their experience so far and what Jamaat sites they had visited. In particular, Huzoor(aa) enquired whether they had prayed at the grave of Hazrat Khalifatul Masih IV(rh) in Islamabad and seen Jamia Ahmadiyya UK.

After a brief introduction to Atfal, Huzoor(aa) welcomed questions. The opening question of the mulaqat was concerning the jurisprudence of reciting Surah al-Fatihah behind an imam. Huzoor(aa) emphasised that the imam should be strictly followed during congregational prayers, even if the imam had finished Surah al-Fatihah and performed ruku‘ (bowing position), those following should stop their recitation and bow.

A Tifl asked Huzoor(aa) whether earthquakes and tsunamis occurred exclusively for the wrongdoings of mankind. Huzoor(aa) responded by saying:

“They [natural disasters] occur as a natural phenomenon as well, however the Promised Messiah(as) said that Allah the Almighty had established natural disasters as a sign for his age. If you look over the history of tsunamis and earthquakes, you will notice the total amount of earthquakes and tsunamis taken place over the last 1000 years are far fewer than the amount of the last 100 years. This is proof of what the Promised Messiah(as) said being true; they are signs of his coming.”

“…These occur due to wrongdoings; it is why the Promised Messiah(as) had warned that if people do not repent then they will keep on facing these types of natural hazards.”

One youngster consulted Huzoor(aa) for career advice, upon which Huzoor(aa) asked about his interests and aspirations. The Tifl responded by stating that he had an interest in computing and desired to serve in MTA International. Huzoor(aa) guided him by saying:

“You can choose any subject related to computers which can be useful for MTA – media, graphics, cameras and other related subjects.”

A young member of the group asked Hazrat Amirul Momineen(aa) whether he was “friends” with Hazrat Khalifatul Masih IV(rh).The response by Huzoor(aa) was instant:

“He was my Khalifa. I cannot be his friend; I was his humble servant.”

A student raised the question regarding whether the Jamaat would ever need a physicists, to which Huzoor(aa) explained:

“The purpose of the Jamaat is to serve the people of the world. As a physicist, at least you can serve humanity; whoever serves humanity is good for the Jamaat. If you are a physicist for the sake of the betterment of the world, then we need you. Dr Abdus Salam was also one; he was a big asset to the Jamaat.”

“You can be Dr Salam as well.”

A question regarding the Markaz of Khilafat was raised by a Tifl, who asked,

“Why did Khilafat move to London and not Canada?”

Huzoor(aa) explained the reasons by saying:

“The reason is that London, in many ways, serves as the hub of the world. There is easy access to other countries and people can easily travel here as well. The reason Khilafat moved here initially was because the Jamaat was well established here at the time … There is an easy approach here, you can easily travel here – people from Pakistan can, as well as India, Africa, the Far East and Malaysia etc.”

The topic of the Hereafter was raised by another member of the Canadian group who asked,

“On the Day of Judgement, when punishments are finished, what will happen after?”

One Tifl enquired about Huzoor’s(aa) feelings when he was imprisoned in Pakistan due to false blasphemy charges. Hazrat Amirul Momineen(aa) expressed his feelings at the time by saying:

“I did not feel anything, I thought that I would stay there for a long period of time, but Allah the Almighty made a plan in such a way that I was freed after 10-11 days. There was no fear in my mind; I was not embarrassed; I was not scared. I cannot say that I was passing through a hard period, enduring hardships – no, I didn’t feel that. I did not do anything wrong. I was imprisoned for the sake of Allah, so I should happily face that.”

Throughout the mulaqat, Huzoor(aa) kept the discussion light-hearted and engaged very lovingly with the young group of Atfal, whilst also giving detailed answers.

One such answer was on a question related to free will. A Tifl asked,

“Why did Allah give man the [free] will to do good or bad?”

“We are not [merely] animals. Human beings are the only animals who have been given wisdom and brains to use. Allah has told us the good and bad things. Those who follow his commandments and do good deeds will be rewarded in the Hereafter and they will create peace and harmony in this world. This is the option given to you because you are the perfect animal in the sense that you have been given wisdom and a brain to utilise all your capabilities.”

Another question raised was regarding life beyond earth and Islam’s perspective on extra-terrestrial life. Huzoor(aa) explained by saying:

“…There are many universes; we believe in that. The Promised Messiah(as) has also written on this. He has said that there are millions of other universes and there are quite a number of planets where there must be life.”

Towards the conclusion of the mulaqat, a youngster asked Huzoor(aa) about playing computer games, to which Huzoor(aa) guided by stating:

“If you want to play some game, play football. Outdoor games are better than indoor games. If it is not polluting your mind and not making you like Daesh, then you can play”

In the end, Huzoor(aa) wished the Atfal an enjoyable trip and graced the group with an opportunity for a group picture.