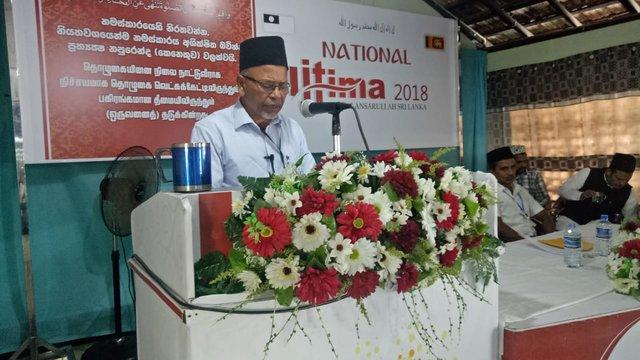 Prior to the main event, a sports event was organised on Saturday, 1 December at the premises of Masjid Fazl, Negombo. The Ijtema started with Tahajud and Fajr prayers. The main event started at 9am with flag hoisting by the National President AH Nasir Ahmad Sahib, followed by silent prayer. The Holy Quran was recited by Maulvi KM Munir Ahmad Sahib followed by translations in all three languages, namely Urdu, Sinhala and Tamil. An Urdu nazm of the Promised Messiahas with its Tamil translation was followed by the Ansarullah Pledge. In his address, KA Shafiullah Sahib, Sadr Majlis Ansarullah, explained the importance of observing Salat. Sadr Sahib, in his address quoted, guidance given by Hazrat Khalifatul Masih II(ra).

The theme of this year’s Ijtema was the Importance of Observing Salat.

AH Nasir Ahmad Sahib, National President AMJ Sri Lanka, quoted excerpts from the address of Hazrat Khalifatul Masih V(aa) at the UK Ansarullah Ijtema 2018. I light of the Holy Quran, he explained how prayer restrained one from indecency and manifest evil and added, “Prayer helps man to rise morally and spiritually and safeguard himself from backbiting, criticising Nizam-e-Jamaat, vain talks, developing hatred amongst one another and divisions among relatives.”

Academic competitions such as the recitation of the Holy Quran, Urdu Nazm and memory test were also part of the event.

In the annual report presented by I Aslam Ahmad Sahib, Zaeem Ansarullah, it was reported that MTA was made available to Ahmadi residents of Puttalam and Polonnaruwa by the local Jamaat, 160 Jamaat magazines were distributed and one tabligh visit to the Eastern Province was undertaken, all during the past one year.

A total of 258 people, with 168 Ansar, participated in this Ijtema.