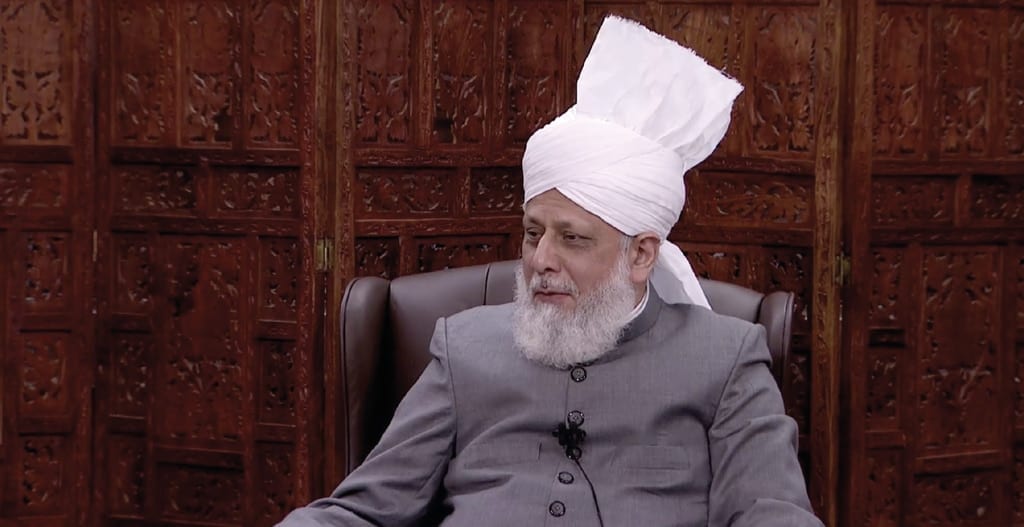 The national amila had started preparation for the mulaqat as soon as we received the good news. The preparation involved looking back at work carried out during the previous year and also the plan for the rest of the current Lajna year. Previous mulaqat notes with Lajna UK amila and amilas of other countries were also consulted in the preparation.

On the day, Huzoor(aa) graced us with his presence at 3:15pm and started the mulaqat with silent prayer.

In the beginning of the mulaqat, Huzoor(aa) very graciously granted a present of the first print copy of Huzoor’s book Domestic Issues and Their Solution to the translator of the book, muavina to sadr Lajna for press and media, Shermeen Butt Sahiba. Huzoor(aa) also most graciously signed the book.

Hazrat Amirul Momineen(aa) asked what the agenda of the mulaqat was and Sadr Lajna, Dr Fariha Khan Sahiba, said that the secretaries would submit their introductions.

Huzoor(aa) spoke to all national amila members and gave them guidance relating to their departments. He also enquired from them the yearly plan for their particular department. Each secretary introduced herself and the role she served in and proceeded to give an outline of her respective plan for the current Lajna year. Huzoor(aa) asked specific questions about the plans of some departments. It was a most invaluable experience for all the amila to have Hazrat Khalifatul Masih(aa) take interest in minute details of our plans and grant us his esteemed guidance.

After the departmental introduction and recounting of the current year’s plans, Huzoor(aa) most graciously answered questions asked by some amila members relating to their respective departments. Huzoor(aa) concluded the mulaqat at 4:20pm just before Maghrib Salat time.

“It was an incredible, majestic experience. Huzoor’s(aa) amazing presence of mind for the smallest of details to the larger concealed issues was awe-striking. Never to be forgotten!”

“For me, to be in the presence of Khalifatul Masih and to witness Huzoor-e-Anwar’s(aa) divinely guided perceptions is truly profound.”

“Alhamdolilah, by the grace of Allah, the mulaqat with Huzoor(aa) greatly exceeded my expectations. To be able to speak directly to Huzoor(aa) about our respective departments and receive blessed guidance on specific issues was a unique experience for me. To be able to spend so much time in the company of Hazrat Khalifatul Masih was both inspiring and highly motivating. I left Mahmood Hall with greater drive to fulfil my responsibilities to both my Khalifa and to the Nau Mubai‘at.”

“It was my first mulaqat with Huzoor(aa) as an amila member for Lajna. I felt so privileged to have had this blessed opportunity. Huzoor(aa) gave us invaluable guidance on many administrative matters. Alhamdolillah.”

“Surely, it is just a miraculous blessing of Allah, the Gracious and Merciful, that the ladies of the Ahmadiyya Muslim Jamaat have the most precious opportunity to spend such time with Hazrat Khalifatul Masih(aa). I felt as if there was a calm and peace in the room throughout the meeting and can truly say that Huzoor’s(aa) presence and his manner of guiding us was completely inspiring. Alhamdolillah.”

Each national amila member expressed the immense privilege and honour to have been in the mulaqat and hoped and prayed that Allah the Exalted enabled all to try and meet the expectations of our beloved Huzoor(aa).