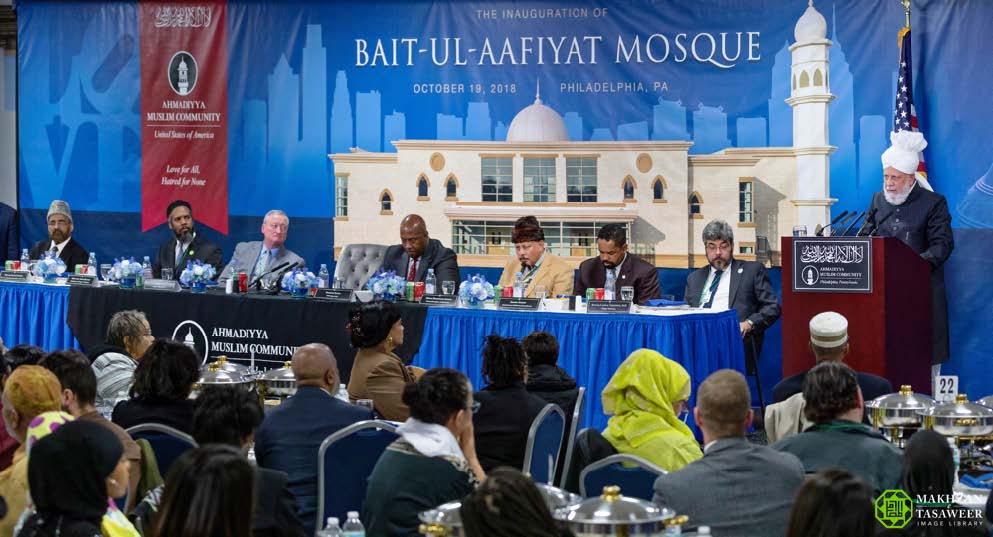 On the evening of 19th October 2018, the World Head of the Ahmadiyya Muslim Community, the Fifth Khalifa, His Holiness, Hazrat Mirza Masroor Ahmad delivered the keynote address at a special reception held to mark the inauguration of the ‘Baitul Aafiyat’ (House of Security) Mosque in Philadelphia, USA. 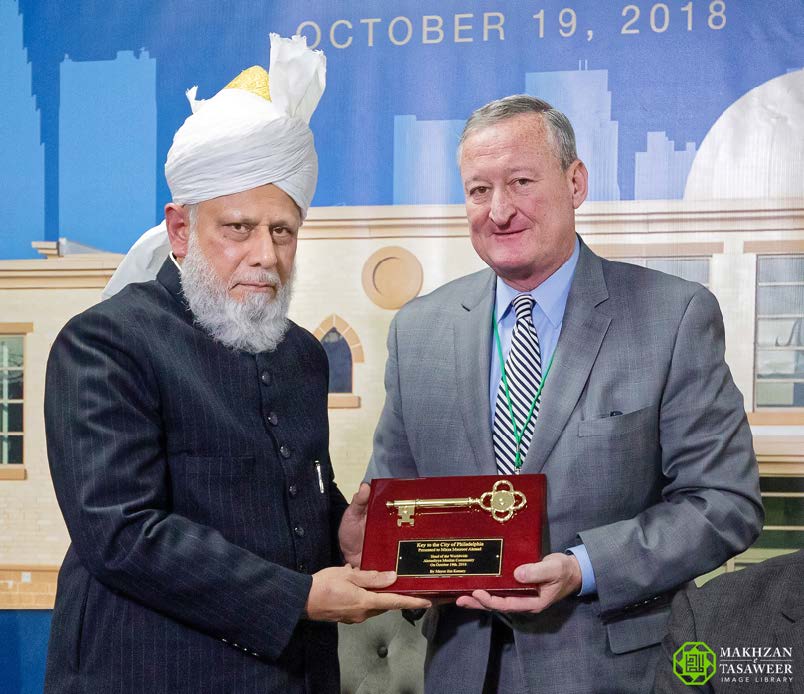 The Mosque, which is the first purpose-built Mosque in Philadelphia, was officially opened earlier in the day when His Holiness delivered his weekly Friday Sermon. Over 175 dignitaries and guests attended the evening reception held in the new Mosque.

The highlight of the event was the keynote address delivered by Hazrat Mirza Masroor Ahmad during which he spoke of the true objectives of Mosques and stated that freedom of belief is a core tenet of Islamic teachings.

Throughout his address, His Holiness emphasised the importance of fostering unity and tolerance within society. 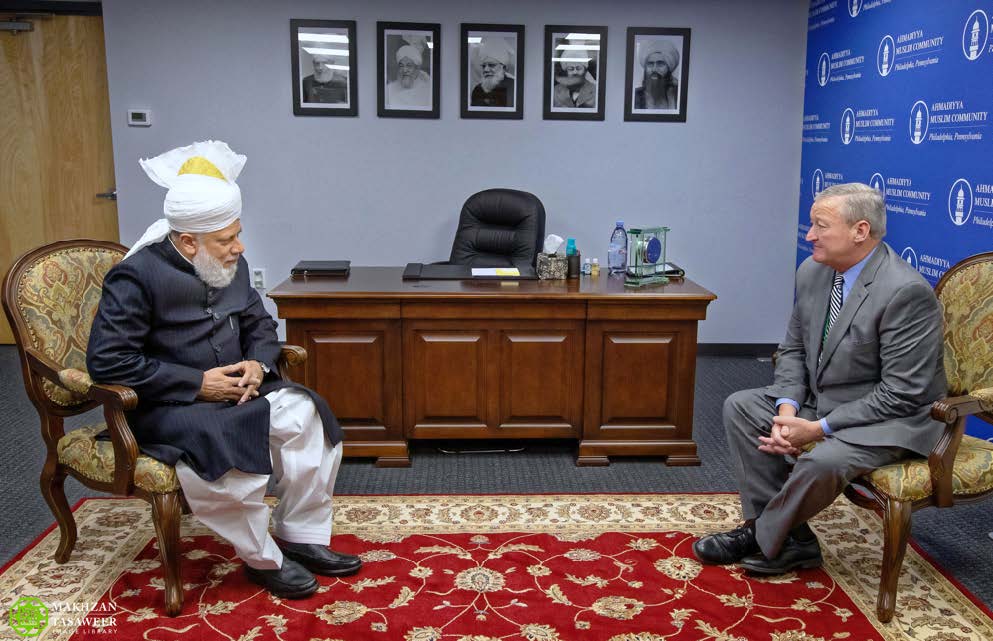 “Irrespective of differences of race, religion or social background, we are united as human beings and so it is vital that we interact with other people, rather than isolating ourselves or only mingling with members of our own particular community… For the advancement and evolution of society, and to foster an atmosphere of peace and togetherness, respectful discourse and discussion between people and amongst different communities is vital.”

Referring to the Ahmadiyya Muslim Community’s motto of ‘Love for all, Hatred for None’, His Holiness said the slogan was nothing new, rather it was based directly upon the teachings of the Holy Quran and of the Holy Prophet Muhammad (peace and blessings be upon him). He said that Islam taught Muslims to respect people of all beliefs and religions. 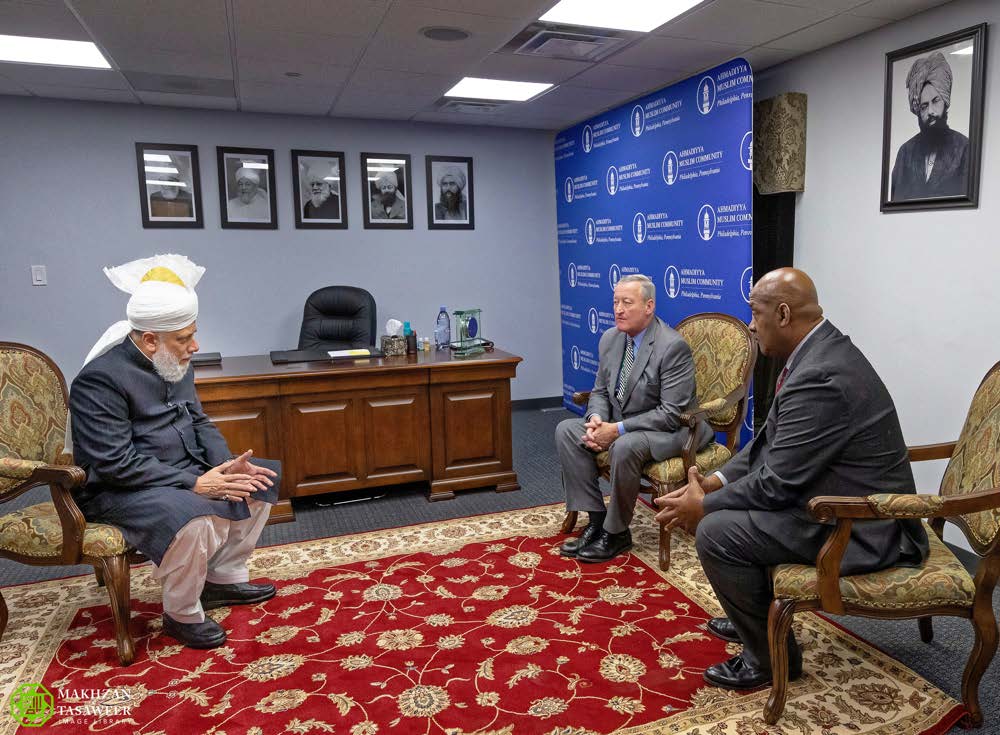 “Whilst it is frequently alleged that Muslims do not respect other religions or their religious figures, nothing could be further from the truth… We firmly believe in the truth of all the Prophets and believe they were sent to draw mankind towards God Almighty and to teach morality and to establish universal human values such as freedom of conscience, justice and human sympathy. Given this, how could it be possible for us to disrespect or dishonour other religions or their followers? Hence, we Ahmadi Muslims are sincere in our claim that we do not hate anyone.” 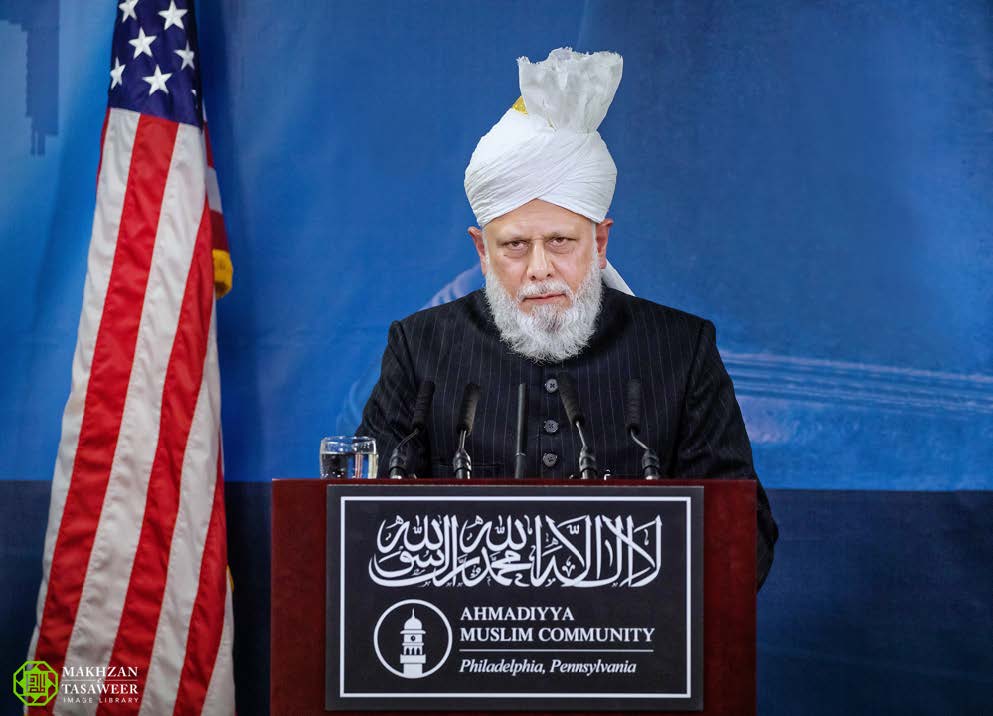 His Holiness said that the Ahmadiyya Muslim Community was

“ever-ready to extend a hand of friendship to others”.

He cited the example of Ahmadi Muslims living in Philadelphia who immediately offered their support to members of the Jewish community following an attack at a nearby Jewish cemetery.

“We seek no reward or gratitude for such things because we are merely following what our religion has taught us, which is to stand shoulder to shoulder with the people of other faiths and beliefs in their times of need or distress. We champion the right of all people to live their lives free from discrimination or prejudice.”

His Holiness said that Islamic history bears testament to

having always been core tenets of Islam and referred to the government and covenant established by the Holy Prophet Muhammad (peace and blessings be upon him) in the religiously diverse city of Medina where everyone was able to freely practice their faith.

“The treaty fostered peace and ensured that a tolerant society prevailed. Thus, more than 1400 years ago, a multicultural, melting-pot of a society was successfully managed and administered in Medina.”

Elaborating upon the Quranic teaching that there should be no compulsion in matters of faith or belief, Hazrat Mirza Masroor Ahmad said:

“Every individual should have the right to choose whatever path he or she wishes to walk upon. Belief is, and should always remain, a matter for one’s heart and one’s mind. At the same time, Islam teaches that, irrespective of differences of religion or belief, every citizen has a duty to remain peaceful and to ensure that he or she does not take any action that threatens the well-being of society.”

“a centre for serving mankind.”

“Our Mosques increase our determination to spread peace and to cultivate bonds of brotherhood and mutual affection with people from all walks of life and to eliminate all forms of hatred, bigotry and division from society.”

“This city is known as the ‘city of brotherly love’ and certainly, our new Mosque is a sign, and indeed a commitment from us, pledging to intensify our efforts to spread love, brotherhood and goodwill here and beyond.”

His Holiness quoted from chapter 4 verse 37 of the Holy Quran which states: 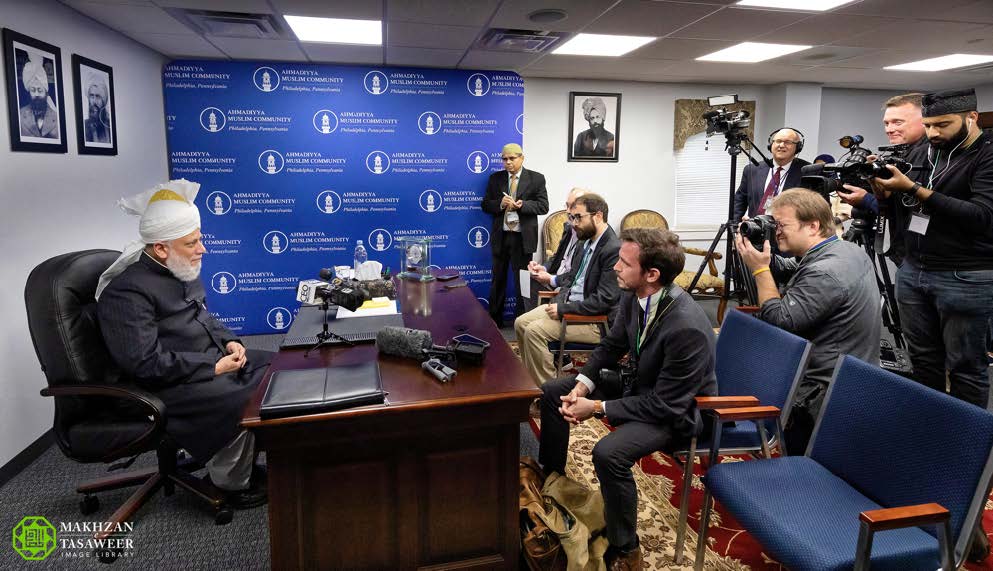 “This single verse of the Quran is a magnificent charter of morality and human rights. It is a golden pathway to peace and a means to brotherly love. In this verse, apart from His worship, Allah the Almighty commands Muslims to treat their parents and relatives with love and affection. He commands them to support and comfort the most vulnerable members of society, such as orphans or those deprived in any way. Thereafter, special mention is made to fulfilling the rights of one’s neighbours. Muslims are taught to love and protect their neighbours and to be ever ready to help them in their times of need.”

“I am sure that you will see for yourselves that where this new Mosque is an added physical attraction and landmark in this city, even more significantly, it will spiritually enhance and beautify the society by spreading love and kindness across the city and far beyond. It will prove a beacon of light and hope to all peace-loving people, irrespective of their caste, creed or colour.”

Concluding his address, His Holiness reflected upon the history of Philadelphia, which was the first colonial city to permit freedom of religion and freedom of worship in America and is the historic city where the Declaration of Independence was signed.

“This city has a rich and proud history and it is my prayer that its people are able to build upon their distinguished past and that these great traditions remain a hallmark of your future. I pray that this city forever remains a beacon of freedom of belief and that the people of this city each play their role in advancing peace, not only in this city, but throughout the United States and indeed across the world.”

Earlier in the evening a range of dignitaries also addressed the audience, whilst the National President of the Ahmadiyya Muslim Community USA, Dr Mirza Maghfoor Ahmad introduced His Holiness prior to the keynote address. 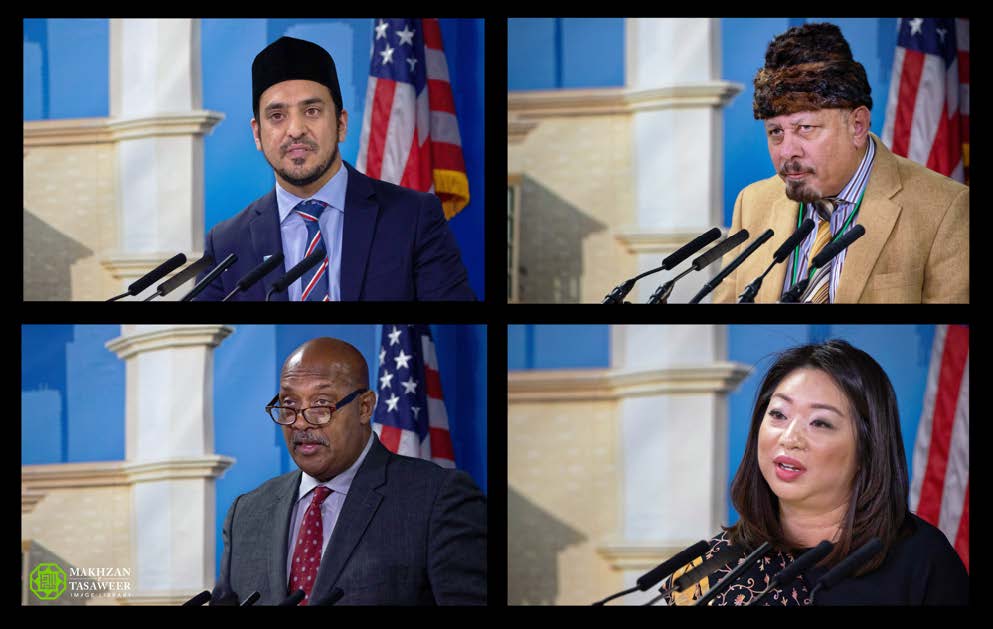 “I am delighted that you now have a beautiful new place to worship. Philadelphia’s history is based on being a place for religious freedom. It is part of its family principles. Our city was built on the idea that while we may be different in nationality and ethnicity, this city welcomes all to worship and practice the faith of our culture of our choosing… The opening of this mosque is a testament to our unity and to our harmony. Muslims are the central part of the American establishment.”

“This is really an honour to be here today, to welcome His Holiness to the great city of Philadelphia, to the city of brotherly love and sisterly affection. On behalf of the Philadelphians I would like to say to the Muslim community that your message of peace are welcome here… I want you to know that we stand with you against hatred, prejudice and wilds.”

The event concluded with a silent prayer led by His Holiness. Later, His Holiness personally met with many of the guests who attended the reception.

Prior to the reception, the Mayor of Philadelphia, James Kenny and Congressman Dwight Evans were able to have a personal audience with His Holiness. His Holiness also met members of the assembled media and answered questions about the objectives of the new Mosque and other related issues.