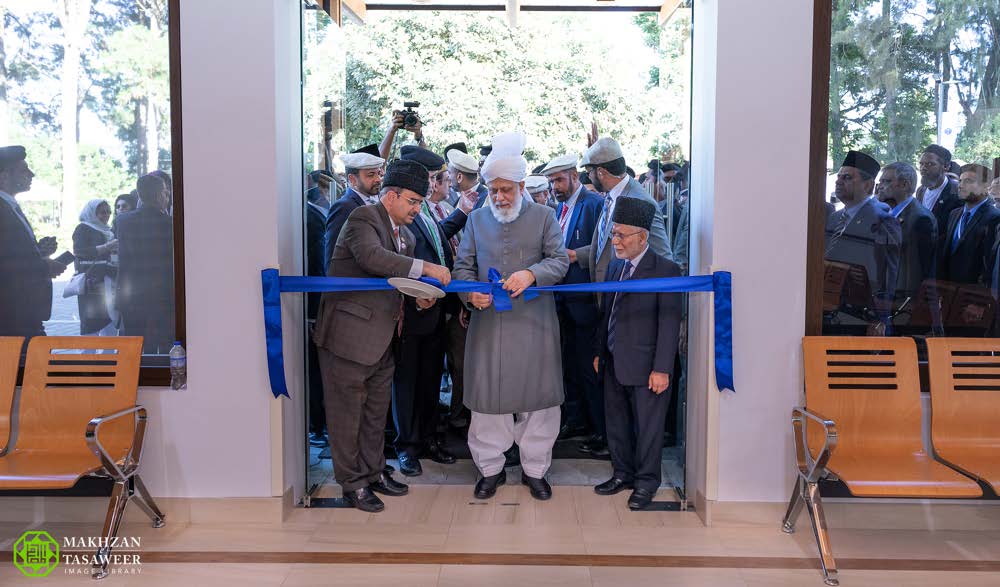 On 23rd October 2018, the World Head of the Ahmadiyya Muslim Community, the Fifth Khalifa, His Holiness, Hazrat Mirza Masroor Ahmad delivered the keynote address at a special reception held to mark the historic inauguration of the Nasir Hospital, a large-scale humanitarian project of Humanity First, an international charity established by the Ahmadiyya Muslim Community.

800 dignitaries and guests, representing 20 countries attended the reception held at the hospital, located in Sacatepéquez, Guatemala.

The highlight of the event was the keynote address delivered by Hazrat Mirza Masroor Ahmad during which he emphasised Islam’s teachings of serving humanity, regardless of faith, caste or colour and outlined the reasons why the hospital had been built.

During his address, His Holiness noted that the event marked an

in the history of the Ahmadiyya Muslim Community as Humanity First launched its first hospital in the Americas. 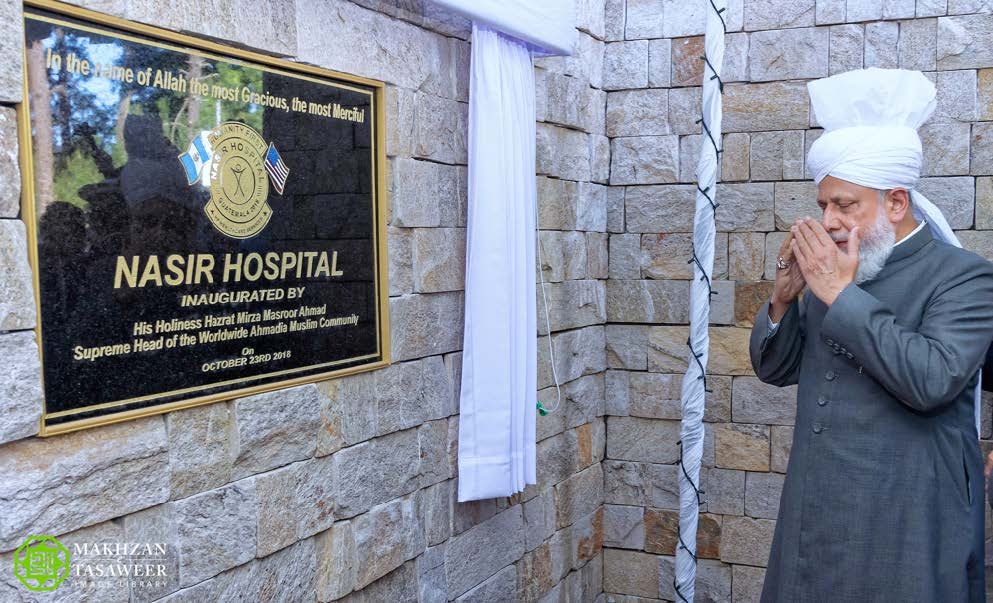 “This hospital has been built with purely one intention and that is, quite simply, to serve humanity by providing high quality healthcare to the people of this nation.”

“on the very front lines of serving humanity”

and it was with this spirit that they had built the Nasir Hospital.

His Holiness cited the fact that the Ahmadiyya Muslim Community had built many schools and hospitals in Africa where majority of the patients and students were non-Muslims.

Whatever humanitarian services the Ahmadiyya Muslim Community or Humanity First offered were given irrespective of a person’s religious beliefs, ethnicity or background. 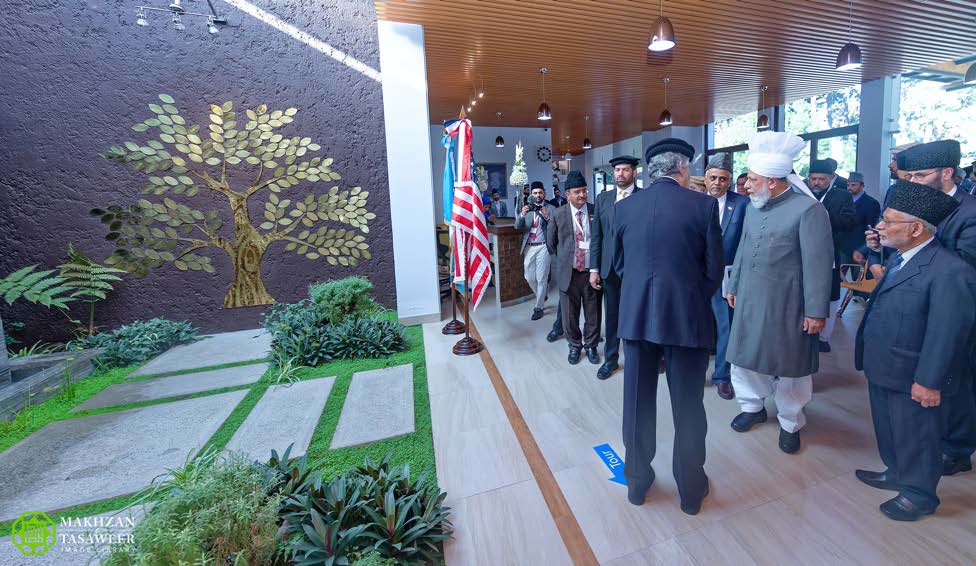 He said the only motivation of the Ahmadiyya Muslim Community was to alleviate the suffering of mankind based on the teachings of Islam. 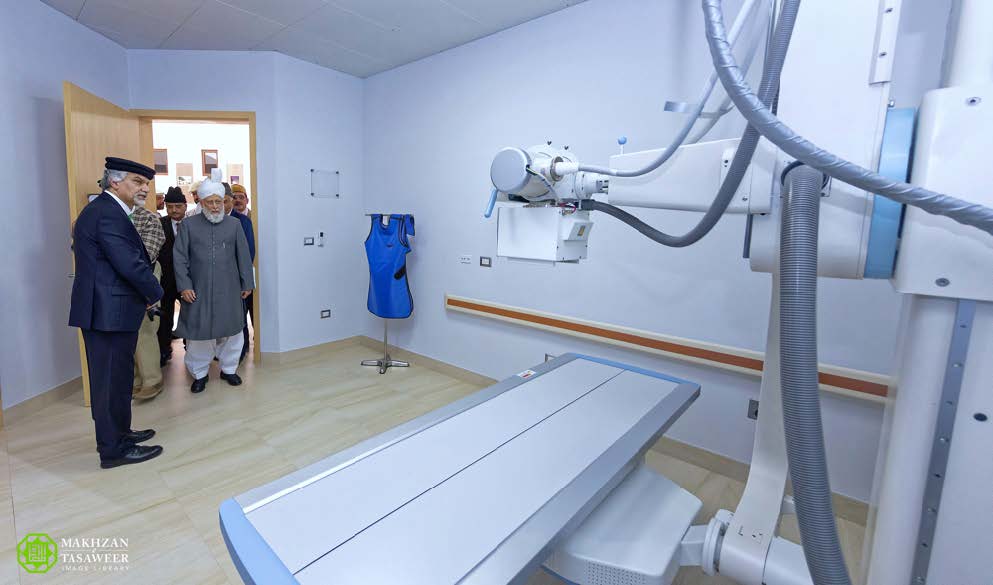 “We seek no praise and no reward for our humanitarian efforts because we are merely doing what our religion has taught us to do.”

Hazrat Mirza Masroor Ahmad quoted chapter 3 verse 111 of the Holy Quran, which states that a Muslim is one who ‘enjoins what is good and forbids evil’.

“Here, the Quran explains that true Muslims are people who promote goodness, stay away from evil and injustice and encourage others to follow suit. Only a person who has a sincere love for humankind and feels the anguish of God’s Creation can be caring and sympathetic in the way the Quran desires. Such profound love for humanity is only possible if your heart is pure and free from malice and selfishness.” 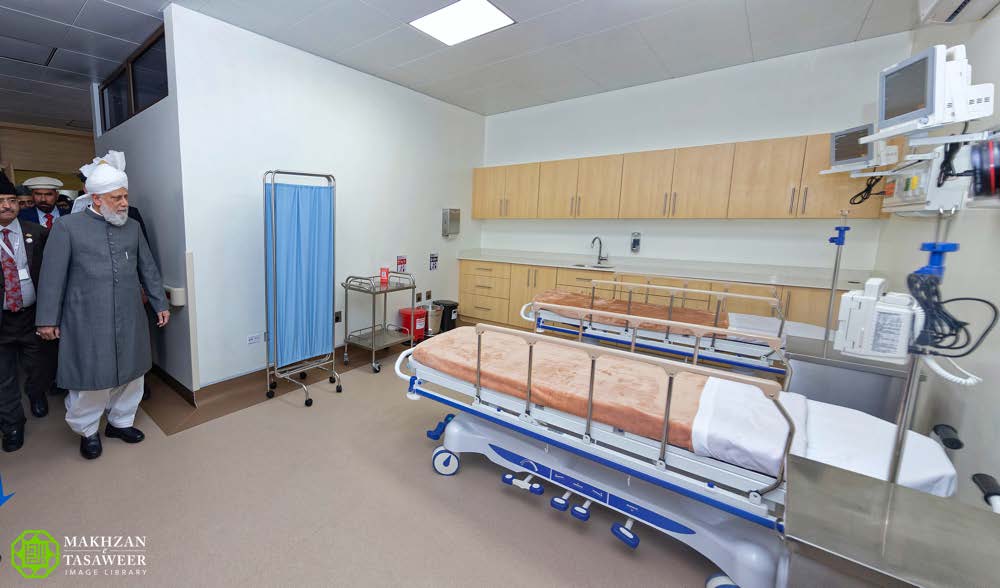 “In chapter 90, verses 15-17 of the Holy Quran, Muslims are instructed to feed the hungry, to show empathy and love to orphans and to help anyone in need, especially those mired in poverty or who are defenceless and weak. Muslims are taught to be the ones who comfort and love those people who have been failed by society and to carry the weight of their burdens on their own shoulders.”

His Holiness quoted further verses of the Holy Quran which instruct Muslims to show kindness and benevolence towards all of God’s creation.

“My purpose in sharing these Quranic quotes is so that you all know that Islam is not what is commonly portrayed in the media. It is not a religion of extremism, violence or terrorism. Rather, it is a religion of love, compassion and tolerance. It is a religion that considers service to humanity as a fundamental obligation placed upon its followers. Thus, how could it be possible that a true Muslim be hard-hearted or fail to help those who are suffering or facing any type of hardship?”

His Holiness went on to speak about the

of the Founder of Islam, the Holy Prophet Muhammad (peace and blessings be upon him).

“From every pore and fibre of his being gushed forth an eternal spring of love and compassion for humanity. For example, on one occasion, the Holy Prophet Muhammad (peace and blessings be upon him) said: “I am with the weak because aiding the weak and poor is the means of reaching Allah the Almighty.” Furthermore, the Prophet of Islam (peace and blessings be upon him) taught that Allah the Almighty was most pleased by those who helped the poor, who filled their empty stomachs and who arranged medical treatment for them.” 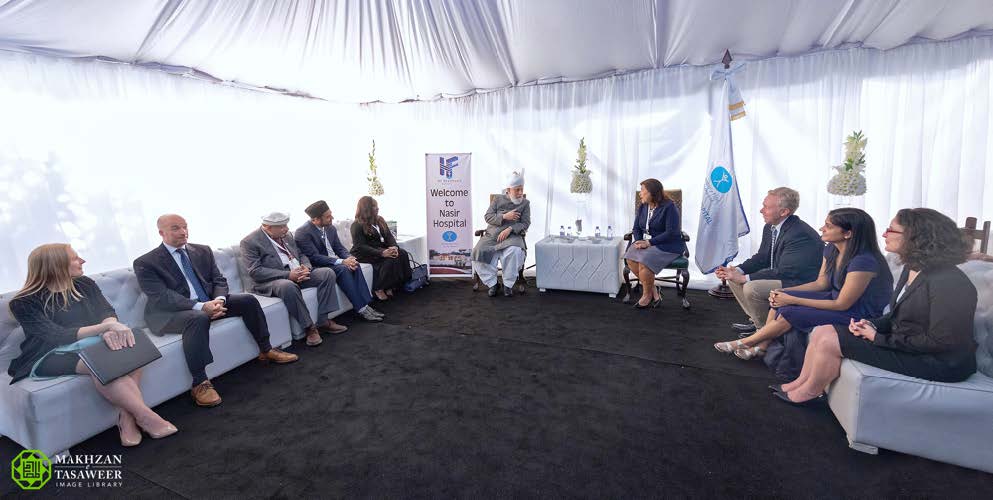 His Holiness said that the Founder of the Ahmadiyya Muslim Community, His Holiness, Hazrat Mirza Ghulam Ahmad, the Promised Messiah (peace be upon him), repeatedly emphasised the humanitarian teachings of Islam.

Hazrat Mirza Masroor Ahmad quoted the Promised Messiah (peace be upon him) who said:

“Treat mankind in the same way that a mother treats her child. This is the way you should be. Not that you help someone only so that you can attain benefit later or take a favour in return.” 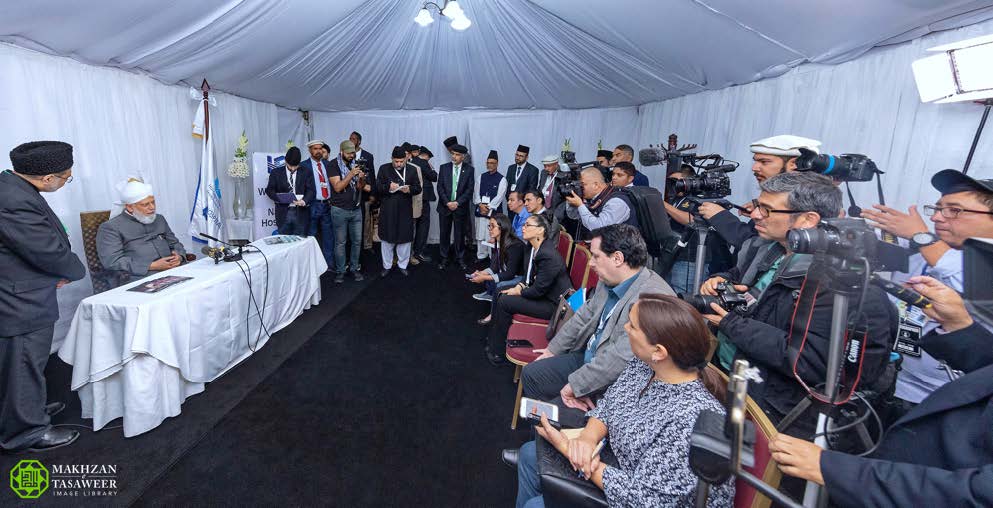 Explaining the concept of caring for others as a mother cares for her child, Hazrat Mirza Masroor Ahmad said:

“What a magnificent and noble teaching! We have all seen and felt the pure love that a mother has for her child. A mother has no expectation of reward, nor does she seek any recognition. All the while, she loves her child more than she loves herself and never weakens in her resolve to nourish and protect her offspring. It is this mother-like spirit of selflessness that Islam requires Muslims to develop in their hearts for all of humanity and not just their own progeny.”

In light of the Islamic teachings, His Holiness said that the Nasir Hospital had been built purely to serve the people of Guatemala and not for profit or to gain favourable publicity.

His Holiness clarified that any funds raised by the hospital would be used to serve the local community and to provide subsidised or free treatment to the needy and that not a penny would be sent abroad.

Reflecting upon the name of the Hospital, Hazrat Mirza Masroor Ahmad said:

“This hospital has been named the ‘Nasir Hospital’ and ‘Nasir’ means to help and support others and so I pray that the hospital forever lives up to its name in all respects. I pray that it develops into an outstanding institution known for its high calibre and, above all, for its unrelenting commitment to helping the most vulnerable members of society.”

In conclusion, His Holiness said that due to the phenomenon of globalisation, there was an even more pressing need for

“brotherhood and mutual love amongst the peoples of all nations and of all beliefs.”

However, His Holiness remarked, that  selfishness and a culture of ‘me’ was widely prevalent. 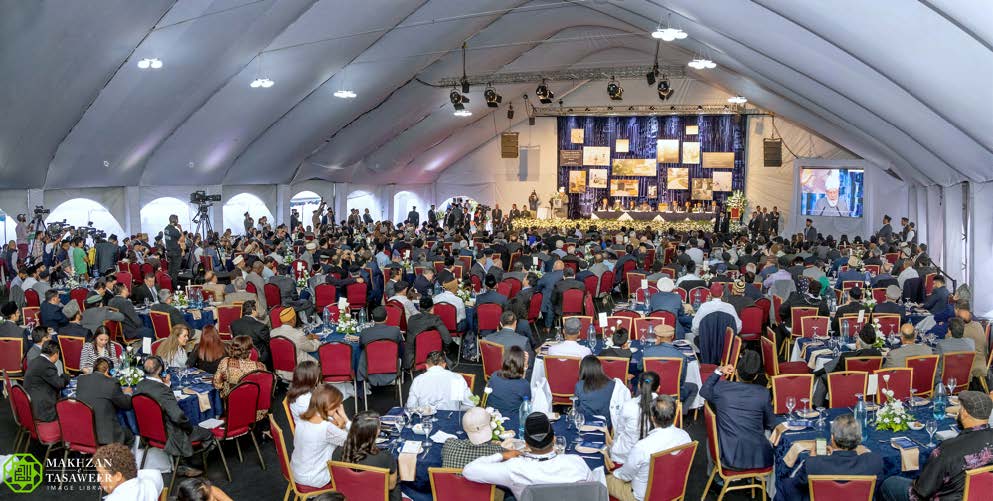 Hazrat Mirza Masroor Ahmad prayed for the world and said:

“I pray with all my heart that mankind forsakes greed and forgoes the pursuit of narrow self-interests and instead comes to recognise the importance of protecting all of humanity and of showing kindness, compassion and love towards God’s Creation. I pray that a spirit of service to humanity takes permanent root in society so that we protect our future and leave behind a better world for our children and coming generations to live in.” 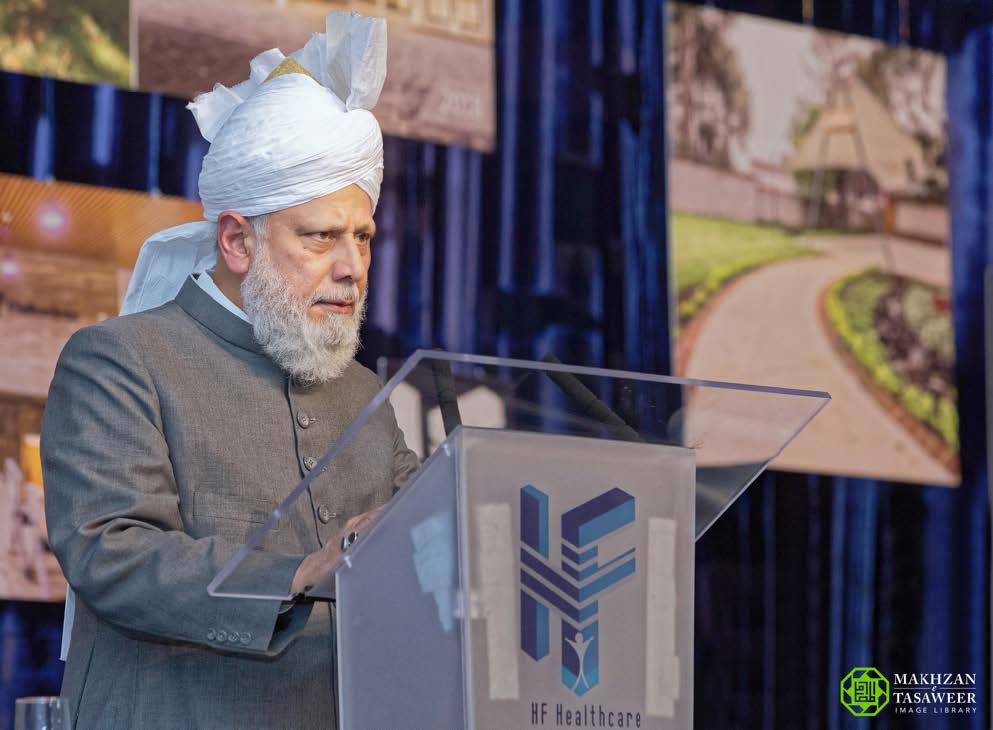 Earlier in the evening a range of dignitaries also addressed the audience.

“It is truly an honour to be here with His Holiness, Mirza Masroor Ahmad, World Head of the worldwide Ahmadiyya Muslim Community. We are deeply moved by His Holiness’ leadership and by his deep commitment to service and tolerance. And so it is fitting that he has come to Guatemala to open this hospital.” 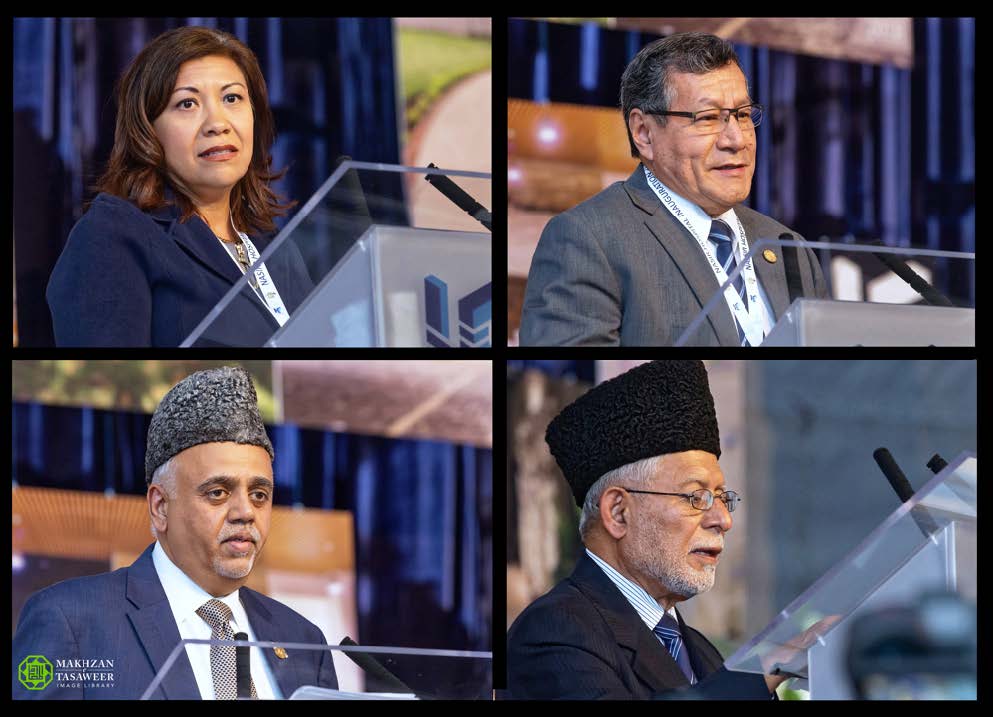 “This hospital will help the advance the health care in our country. This day is very special for our community and we desire to use this hospital as an example for other hospitals in the country. On behalf of the Ministry of Health, I thank the Ahmadiyya Muslim Community. We look forward to utilising these services and to improving the health of the entire country.”

Earlier, His Holiness met with a range of dignitaries privately, including Congresswoman, Norma Torres from the United States, Miguel Figueroa, Vice Minister of Health, Guatemala and Iliana Dominguez, Member of Congress, Guatemala.

His Holiness also answered questions during a press conference with the assembled media. 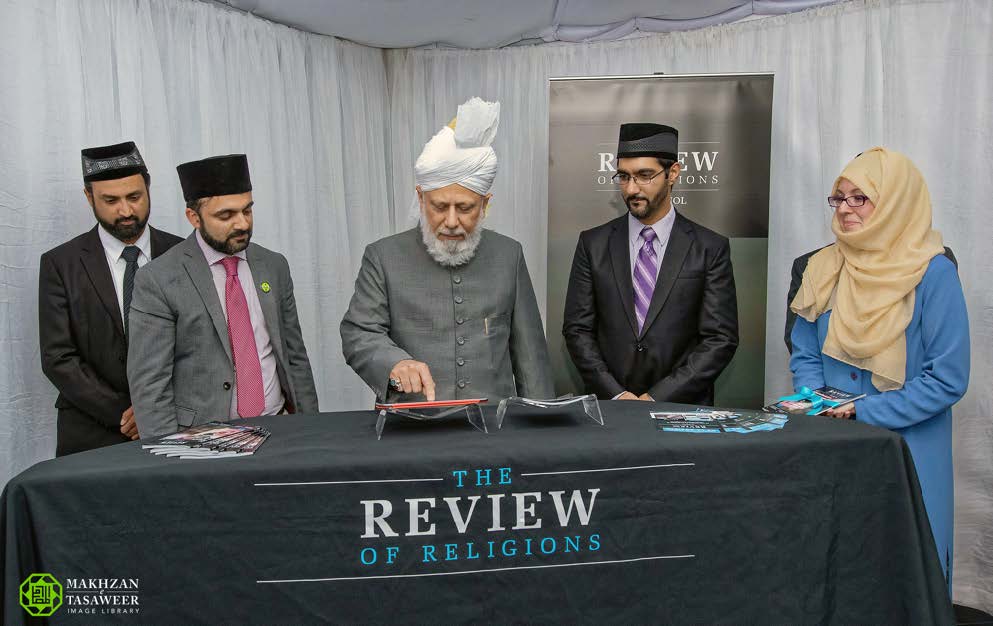 Following the event, His Holiness also launched the first ever edition of the Review of Religions magazine in the Spanish language.