A Message of Peace 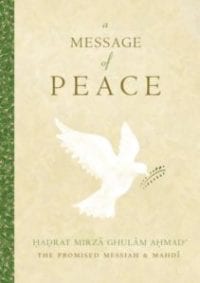 A Message of Peace

In a world plagued with intolerance for cultural, racial and religious differences, A Message of Peace serves as a panacea to the ills of the society. Prophetic in foresight and universal in scope, this book lays out a path to the peaceful existence of all humans based on the central theme of worshipping the One God.

It is not surprising therefore that A Message of Peace forms the last work of a man who was destined to lay the foundation for the establishment of peace in this day and age and whose advent was prophesied in all major religions of the world-the Promised Messiah and Reformer of the Latter Days. “My countrymen!” writes the Promised Messiah, “A religion which does not inculcate universal compassion is no religion at all. Similarly a human being without the faculty of compassion is no human at all.”