A Message of Peace - A Word of Warning 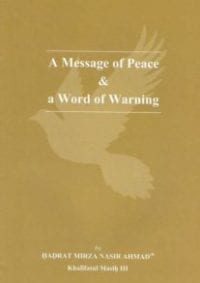 A Message of Peace – A Word of Warning

Hazrat Mirza Nasir Ahmad(rh) – Khalifatul Masih III (the third successor of The Promised Messiah), in the capacity of Khalifatul Masih, on his first visit to some countries of Europe and Africa delivered a public lecture on 28 July 1967 at the Wandsworth Town Hall, London. It was later published under the title A Message of Peace and a Word of Warning and is being presented here again.

‘O Europe, you are not safe and O Asia, you too, are not immune. And O dwellers of Islands, no false gods shall come to your rescue. I see cities fall and settlements laid waste. The One and the Only God kept silent for long. Heinous deeds were done before His eyes and He said nothing. But now He shall reveal His face in majesty and awe. Let him who has ears hear that the time is not far. I have done my best to bring all under the protection of God, but it was destined that what was written should come to pass. Truly do I say, that the turn of this land, too, is approaching fast. The times of Noah shall reappear before your eyes and your own eyes will be witnesses to the calamity that overtook the cities of Lot. But God is slow in His wrath. Repent that you may be shown mercy! He who does not fear Him is dead not alive.’